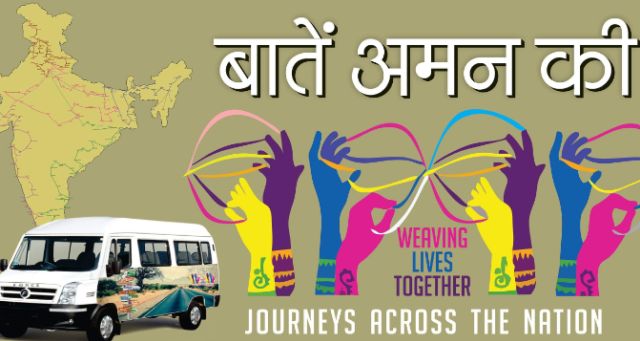 New Delhi: The Baatein Aman Ki Yatra was flagged off from here on Friday. The commencement programme was held in the Constitution Club of India and attended by over 200 activists, community members, political leaders, and civil society members.

Annie Raja from the National Federation of Indian Women opened the programme by talking about the need for this yatra, “today our battle is against many different types of social injustices, violence and hatred. We are fighting against communalism and a rampant disregard for the Indian constitution” she said.

The hall was echoing with slogans, a spirit that the yatra will carry with itself as it travels on five parallel routes across the country. Talking about the motivation for the yatra, author Farah Naqvi said, “This yatra is to reclaim the democracy that has been repeatedly threatened. The women who are leading this yatra know the importance of it and that is the dialogue of peace, empowerment, love and kindness.”

The women who will be travelling throughout these yatras were called upon the stage amidst thunderous applause, “women will lead this yatra because they face the most backlash in times of social injustice. They are the ones who are victimised the most and they are the ones who will fight it as well” added Farah.

This yatra was planned through multiple and parallel meetings across the country that were conducted by activists, Shabnam Hashmi, Leena Dabiru and their team which also consisted of NFIWs Annie Raja and members of ANHAD. “The core idea behind the yatra was to counter the growing atmosphere of fear and hatred. We wanted women to lead the way, to take over the yatra and spread the message of peace and democracy. Pamphlets with the preamble to the Indian Constitution will also be distributed during the yatra and oaths will be taken to enforce it and live by it” said Shabnam Hashmi.

Syeda Hameed, a former member of the Planning Commission, was also present and shared some beautiful verses to inspire the present audience, “in this day and age, there is a lot of distance that is being created between people of different communities, thoughts and faiths. This yatra will try to reduce that distance, to create harmony and spread the message of peace and love” she said. She also added, “it is very important for all of us to remain optimistic, to remain full of hope because we should and we can draw our strength from it. This fight will be long and hard and keeping our destination in mind, we should work harder for it.”

Anjali Bhardwaj, of Satarak Nagrik Sangathan, spoke about the need to recognise the ways in which our Constitution and our democracy is being threatened. “Independent voices, true and compassionate voices within the country are being silenced forcibly. Institutions of accountability are being undermined. People raising issues of human rights are being labelled as terrorists and anti-nationals for speaking the truth and it is now time we counter it systematically and fearlessly. This yatra will hopefully spread the message of peace across the country” she said.

Social activist and a core planning member of the Baatein Aman Ki yatra, Leena Dabiru, gave the present audience a glimpse into how massive the yatra is and how many places it will cover. “The yatra is covering almost 250 places across the length and breadth of the country. We are making sure that the yatras consist of varying and diverse voices. One of the outcomes of this yatra will be the renewed building of a network comprising of new organisations, civil society members, women, men and ideas. Meanwhile, it is important for us to spread the message of the yatra as far and wide as we possibly can” she said.

Women’s rights activist from Tamil Nadu, Thilagavathi also spoke at the programme. “Even though this yatra is about peace and harmony, we will not be negotiating for it, we will not be begging for it. We will be fighting for it, demanding it, we will be angry, loud and courageous, we will make sure this yatra is full of life” she said. Vandita Acharya, an activist from Assam who will be leading the yatra in the north east also spoke about how the north-east has always been neglected when it comes to talking about India as a country.

The programme ended with slogans, chants and the flagging off of the yatra from the Constitution Club of India. A bus full of eager and brave women were sent off with loud cheers of “Inquilab Zindabad!”, it captured the spirit of the yatra and will continue to define it.