Gauri Lankesh Murder: Hindu Janajagruti Samiti linked with killers was patronized by Modi when he was Gujarat CM 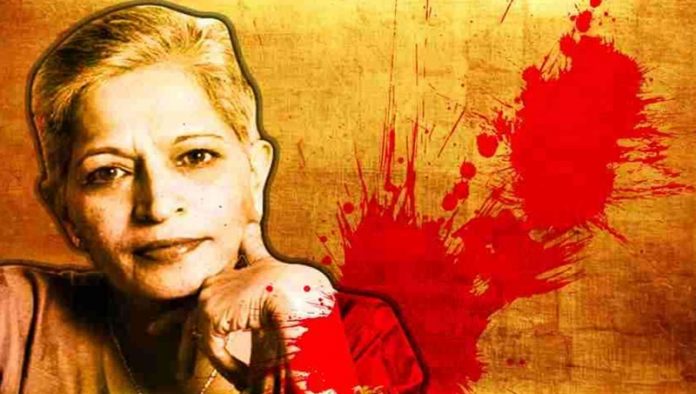 The Karnataka police has found clear linkages between the killers of Gauri Lankesh and two Hindutva organizations, the Hindu Janajagruti Samiti (HJS) and its sister concern, Sanatan Sanstha.[i] These are two Maharashtra/Goa based Hindutva organizations which adore MS Golwalkar. The hand of the same organizations was suspected in the murders of Narender Dabholkar, Govind Pansare and Professor MM Kalburgi.

But one important fact is not known that Narendra Bhai Modi has been a patron of  HJS. When HJS organized second all India Hindu Convention for making India a Hindu rashtra between 6th and 10th June 2013, Modi who was then CM of Gujarat, sent the following felicitations message to this conference which aimed at replacing the democratic-secular polity with the Hindu state. He wrote:

“THE AWARENESS CREATED TOWARDS DHARMA, CULTURE AND TRADITIONS, IS LIKE A SACRED FIRE LIT ALL THE TIME. BEING IN COMMUNION WITH STYLE OF LIVING, PRINCIPLES AND HUMANITY IS THE ZENITH OF SUPREMACY OF HINDU CULTURE AND DHARMA IN THE UNIVERSE. HINDU CULTURE HAS RETAINED ITS SIGNIFICANCE FROM ANCIENT TIMES DUE TO THE THREE PRINCIPLES OF COMPASSION, TOLERANCE AND INTEGRATION. SUPREMACY OF THE FLAG OF DHARMA AND SPIRIT OF UNIFICATION CAN BE PRESERVED BY PROTECTING THE CULTURE. EVERY ORGANIZATION THAT WORKS, BASED ON THE INSPIRATION OF NATIONALISM, PATRIOTISM AND TRADITION OF LOYALTY, IS THE IDENTITY OF OUR PEOPLE’S STRENGTH.”

“CLOSENESS TO LOVE, HUMANITY AND DIVINITY, GIVING PRIORITY TO NON-VIOLENCE, TRUTH AND ‘SATTVIKATA’ ARE THE PRINCIPLES FOLLOWED BY HINDUS IN LEADING THEIR LIFE BUT TO HAVE TO RESIST BRUTAL, INHUMAN TENDENCIES SEEMS TO BE THE DESTINY OF HINDUS. IT HAS BEEN OUR TRADITION TO BE ALERT EVERY MOMENT AND RAISE VOICE AGAINST OPPRESSION…ONLY BY PROTECTING OUR CULTURE, CAN THE FLAG OF ‘DHARMA’ AND UNITY BE KEPT INTACT. ORGANISATIONS INSPIRED BY NATIONALISM, PATRIOTISM AND DEVOTION FOR THE NATION ARE TRUE MANIFESTATIONS OF PEOPLE’S POWER,”

The well-wisher Modi’s message to HJS ended with the following words:

I FELT PROUD WHEN I HEARD ABOUT THE CONVENTION FROM HINDU JANAJAGRUTI SAMITI. THE GREAT PERSONALITIES COMING FROM ALL OVER THE WORLD WILL BE DISCUSSING ISSUES RELATED TO THE WELFARE OF HINDUS AS ALSO THE WORLD. I WAS HAPPY TO GET INVITATION TO ATTEND SUCH CONVENTION. MY BEST WISHES FOR SUCCESS OF THIS CONVENTION WHICH HAS FAR-REACHING EFFECT.” [This letter is inserted at the end]

It was no routine or token felicitations message which VIP’s normally write for number of organizations. It was a message from Gujarat CM who was aware of the HJS’s global role in protecting Hindu culture. Modi also under scored the significance of HJS when he said that “it has been our tradition to be alert every moment and raise voice against oppression…only by protecting our culture, can the flag of ‘dharma’ and unity be kept intact. Organisations inspired by nationalism, patriotism and devotion for the nation are true manifestations of people’s power”. Modi also acknowledged the fact that “great personalities coming from all-over the world” would be joining this convention.

In order to know the whole conspiracy it’s essential that Modi, who is our PM now, is also investigated. In the recent past, prime ministers of Israel and Pakistan and chief minister of Delhi were interrogated for alleged involvement illegal activities.

Moreover, according to HJS in the above mentioned conference to undo democratic-secular India there were foreign delegates also “from countries like Sri Lanka, Bangladesh, Nepal, and the like”. The Karnataka police must also look into the international linkages of the HJS terrorists.
Shockingly, from the same dais in this convention from where Modi’s felicitation message was read, one of the prominent speakers, K.V. Sitaramiah, declared that Gandhi was “terrible, wicked and most sinful. Rejoicing the killing of M.K. Gandhi, he went on to declare,

“As Bhagwan Shri Krishna said in the Gita, Paritranaya Sadhunam Vinashaya Cha Dushkritam/ Dharamasansthapnaya Sambhavami Yuge-Yuge (For the protection of the good, for the destruction of the wicked and for the establishment of righteousness, I am born in every age) On…30th January 1948 evening, Shriram came in the form of Nathuram Godse and ended the life of Gandhi.”[ii]