Will not allow tinkering with Constitution: Muslim OBC meet 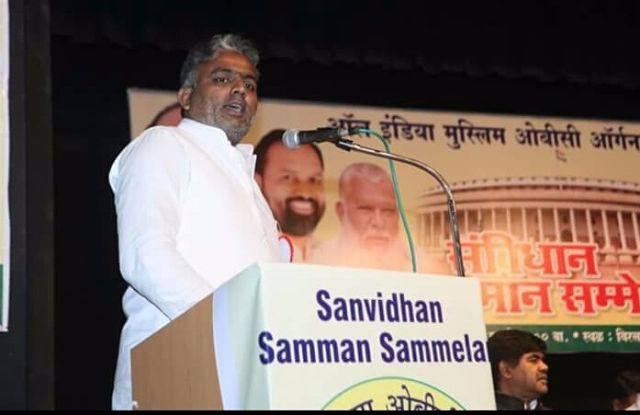 Mumbai: Ahead of the crucial Lok Sabha elections, the All India Muslim OBC Conference – that saw the presence of top community leaders – declared that they would resist and prevent any move to change the Constitution or tamper with its basic structure. “This would not happen…we would not allow the Constitution to be changed,” Shabbir Ahmed Ansari President, All India Muslim OBC Organization, said at the Samvidhan Samman Samellan.

“What the country is witnessing is like undeclared Emergency,” said Bhujbal, a veteran NCP leader, even as he targetted the Narendra Modi led government. “The country is facing through a crucial phase. This elections are going to be crucial,” he said, adding that if the current dispensation manages to win the elections, they would end democracy. “What is happening today is something the country has never seen before,” he said.

Bhujbal further said: “Today Constitution has gone in wrong hands.” Hence, he pointed out that from now on like minded parties must start preparing for elections. Jankar added that Muslim OBCs are not getting benefits at par with Hindu OBCs. “Both communities need to sit together and come out with a solution,” he added, pointing out that the OBCs and Dalits together would be a deciding factor in the 2019 elections in India and in Maharashtra. Ansari pointed out that the threat to Constitution is not a new phenomenon but it has been manipulated and disturbed since the early days of Indian democracy.

“Many of total 123 amendments done to the Constitution of India has hit the basic spirit and essence of the religious equality and have been done with the intention to help the government in power or to support a particular segment of the people in the country,” he pointed out.

“The most prominent example is the Presidential order given on 10th August 1950 that no person professing any religion other than Hinduism would be deemed to be a member of a Scheduled Caste. This patently anti-secular and grossly anti-democratic order was stiffly resisted by Sikh and Neo Buddhist Dalits. In the face of strong protests, over the years the Indian state was compelled to extend Scheduled Caste status to Sikh and Nav Buddhist Dalits. Yet, it continues to deny the same to Christian and Muslim Dalits,” added Ansari. This is a clear violation of the Constitutional rights of these groups that number in the tens of millions. It is a patent act of discrimination on the basis of religion engaged in by the Indian state itself, clearly revealing its pro-Hindu bias. As per Ranganath Mishra Commission Recommendations which was formed by UPA Government, this religions discrimination under the Para 3 of Article 341 should be immediately removed.