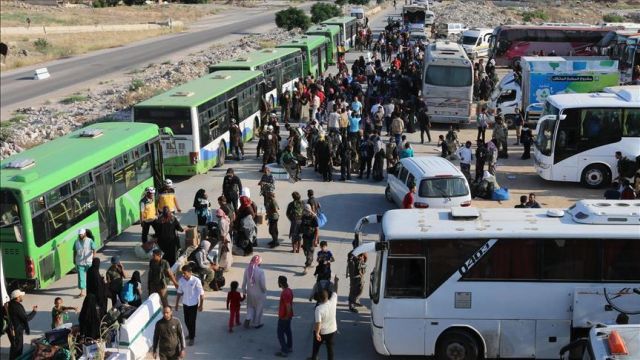 Idlib, Syria: A first convoy of evacuees from Syria’s southwestern Quneitra province arrived in opposition-held Idlib province on Saturday, in line with an agreement between the Bashar al-Assad regime and armed opposition groups.

The convoy of 40 buses carried around 500 evacuees, according to an Anadolu Agency reporter in the region.

Under the deal, more convoys are expected to follow from the southwestern province, which is located adjacent to the Israeli-occupied Golan Heights region.

The agreement provides opposition fighters with a safe exit to Idlib in exchange for surrendering their heavy weapons.

A similar deal was implemented recently in Syria’s southwestern Daraa province, according to which regime forces — along with Russian military police — were allowed to deploy along the nearby border with Jordan.

Syria has only just begun to emerge from a devastating conflict that began in 2011 when the Assad regime cracked down on demonstrators with unexpected ferocity.

Share
Previous Hamas announces ceasefire with Israel after day of strife
Next Sharif, Maryam Nawaz unlikely to be shifted to guest house