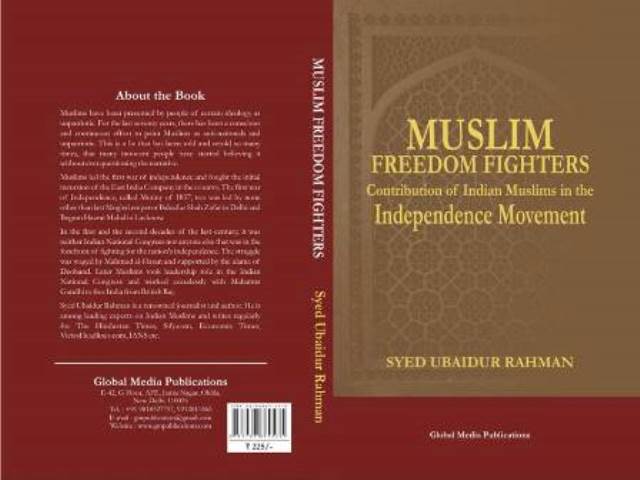 Name of the Book: Muslim Freedom Fighters: Contribution of Indian Muslims in the Independence Movement

A different sort of history is being written these days. Under the tutelage of the Saffron Brigade, new breed of historians is writing the history of India where minorities, especially Indian Muslims’role is completely erased. The only references they will get in their version of history books will serve to demean the community that has existed in India for the last more than a thousand years and has been an integral part of the national fabric.

Coupled with the media onslaught and the rising Islamophobia in the country, the new version of the history not just aims to wipe out Muslims’ contribution in the country, but demonises them in the eyes of the common people. The media, in a stasis of perpetual decline and complete submission, is already doing their bidding, poisoning the young minds and changing the communal harmony into communal hatred across much of the country.

The new version of the history being rewritten and taught to young minds through not just Sangh schools, but throw the mainstream government run schools will further vitiate poison the young minds.

Rahman profiles forty Muslim personalities who led from the front in the first war of independence or the mutiny of 1857, Reshmi Roomal Tehrik of early twentieth century and then the final freedom movement that was led by Mahatma Gandhi.

While the Mutiny and Mahatma Gandhi led freedom movement get prominent mention everywhere, the sacrifices made by the Indian Ulama from Deoband in the Reshmi Roomal Tehrik or Silk Letter Movement doesn’t get much mention in our history books. By mentioning it prominently and the role of Ulama-e-Deoband he tries to give a fillip to this urgent need as well. The Silk Letter Movement refers to a movement organised by the Deobandi leaders between 1913 and 1920, aimed at freeing India from the British rule by allying with Ottoman Turkey, Imperial Germany, and Afghanistan. The plot was uncovered by Punjab CID with the capture of letters from Ubaidullah Sindhi, one of the Deobandi leaders then in Afghanistan, to Mahmud al Hasan, known as Shaykhul Hind. They had formed a government in exile in Kabul with Maharaja Mahinder Pratap Singh as its president, Maulana Barkatullah Bhopali its Prime Minister and Maulana Ubaidullah Sindhi as its Interior Minister.

While writing in the introduction the author says, “Muslims have been presented by people of certain ideology as unpatriotic. For the last seventy years, there has been a conscious and continuous effort to paint Muslims as anti-nationals and unpatriotic. This is a lie that has been told and retold so many times, that many innocent people have started believing it without ever questioning the narrative”.

He goes on to add, “This is a monumental lie and has no basis. Muslims led the first war of independence and fought the initial incursion of the East India Company in the country. Tipu Sultan and his father, Hyder Ali, the rulers of Mysore, were the only rulers in the country who tried to face the British expansionism in India and gave it a tough fight, beating the colonial armies on multiple occasions. Without the support of Marathas and Nizam, the East India Company wouldn’t have been able to emerge victorious…The first war of Independence, called Mutiny of 1857, too was led by none other than last Moghal emperor Bahadur Shah Zafar. In Lucknow, it was Begum Hazrat Mahal who gave a tough fight to the marauding colonial armies and their agents. She defeated the British army and for around a year remained a thorn in the neck of the British Raj, before being defeated and driven out of the country.”

Elaborating the role of the Ulama-e-Deoband in the freedom struggle, the author says, “In the first and the second decades of the last century, it was neither Indian National Congress nor anyone else that was in the forefront of fighting for the nation’s independence. The struggle was waged by Mahmud al-Hasan and supported by the ulama of Deoband…While Indian leaders were still trying to find a way to raise their voice for even a dominion status, these people, with the help of their Hindu comrades, were setting up government in exile and negotiating with Russia, France, Germany and Turkey to recognize their government in exile in Kabul.”

“Mahmud al-Hasan was a true leader and a visionary. A legend who mesmerized the Muslims of the Indian Subcontinent, he was nicknamed Shaykhul Hind, the leader of India. With his academic accomplishments at Darul Uloom, initially as a teacher and later as the principal, he won the hearts of many people in the entire Indian Subcontinent. It was pretty soon that the Shaykh-ul-Hind realized that the people of India need to drive the British Raj out of the nation as soon as possible”, writes the author.

While highlighting the role of the Muslims in the final freedom movement under Mahatma Gandhi and the Congress Party, the author says that Muslims contribution was so big that at least nine Muslim leaders were elected President of the Congress, with Maulana Abul Kalam Azad leading it for the longest period.

While many books have been authored on freedom struggle and on Muslims and their role in freedom movement, this book stands apart as it is handy and provides short profiles of prominent freedom fighters. Accessing voluminous books for common men and young people is a Herculean task. This book is a must for everyone eager to know the Himalayan contribution of Indian Muslims in the wars of independence, especially for young boys and girls who are susceptible to vicious propaganda being unleashed by the Sangh and its frontal organizations.