Aligarh/ New Delhi: The families of Mustaqim (22) and Naushad (17) who were killed in a highly questionable encounter on September 20th have been on the verge of starvation as the police put their houses under virtual siege, not allow anybody to meet or give any help to them.

While in a brazen display of lawlessness, Bajrang Dal goons in Aligarh assaulted former Samajwadi Party spokesperson Pankhuri Pathak and journalist Amaresh Misra who went to meet the victims’ families on Saturday.

MuslimMirror reported  on Friday that police in plainclothes have been manning the houses of victims and using the ‘services’ of right wing goons and anti-social elements to intimidate and attack persons and delegations who come to meet the victim’s families.

Their latest prey  became SP leader Pankhuri Pathak who came along with Amresh Mishra to meet the victims’ mother.  She tweeted that Bajrang Dal goons attacked her and dared the Yogi government to arrest them.

Leader of the Bajrang Dal Mob that attacked me. First they tried provoking us, when that did not happen they attacked. The attack on us was pre-planned. Will @Uppolice @myogiadityanath @dgpup dare to arrest these people? Total mobocracy in the state ! 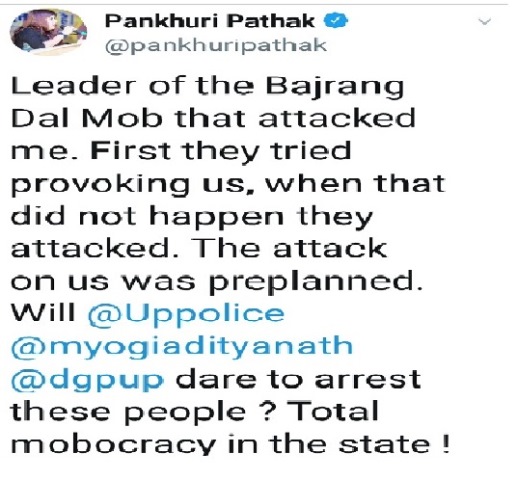 Pankhuri Pathak was live on Facebook when Bajrang Dal goons attacked on her. They also damaged two cars while attacking her team.

Hearing the incident, Pathak’s friend  Madhur Danthala said it is extremely shocking and it shows UP police’s incompetence. She tweeted:

“Extremely shocking to hear that @pankhuripathak & others who went to visit families of extra judicial killings were attacked by goons! The @Uppolice is incompetent & even lacks basic civility as was displayed in the incident where a woman was attacked for ‘being with a muslim!’M”

‘Bajrang Dal and RSS attacked on me in Aligarh. Initially  I was left alone as Pankhuri Pathak and her team headed forward while a separate  team caught on me .They  have broken my spectacle and  injured me , wrote  Amaresh Misra in  his Facebook post.