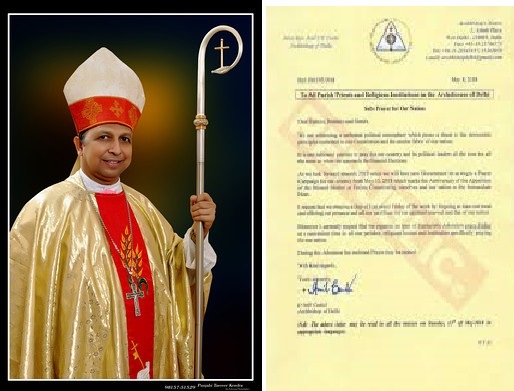 The gross over reaction of Sangh Parivar to the letter of Archbishop of Delhi, Anil Couto, dated 8thMay 2018 and addressed to all parish priests and religious institutions in the Archdiocese of Delhi asking them to pray for ‘our nation’ seems to be well calculated. The letter begins with the observation “[w]e are witnessing a turbulent political atmosphere which poses a threat to the democratic principles enshrined in our Constitution and the secular fabric of our nation”. The letter then requests the 138 parish priests and 5 religious institutions withing Delhi to observe ‘a Day of Fast every Friday … offering our penance and all our sacrifices for our spiritual renewal and that of our nation.’ Assuming that the request is complied by all the 138 parish priests addressed in the letter, it is still a very tiny number.

Christians (including Protestants who are not addressed in the letter) are 0.87% of Delhi’s population. The Hindu supremacists project the letter as a huge problem even when this very tiny section of the population was addressed which hardly counts politically! However, by responding to an otherwise innocuous letter, the BJP leaders have made it a national issue reaching out to a much wider audience.

The Hindu supremacists have problematized the timing of the letter – just one year before the General Elections, as well as the observation of the Archbishop “turbulent political atmosphere which poses threat to the democratic principles enshrined in our Constitution and secular fabric of our nation”. The two most important persons after the PM Narendra Modi in the BJP and in the NDA Government responded to the letter. Rajnath Singh, Minister of Home Affairs said, “there was no discrimination against anyone”. The letter made no claim to the contrary. Amit Shah’s response was: “polarising people in the name of religion” was “not appropriate” (Mathew 2018). The letter remotely doesn’t seek to polarize in the name of religion. In fact it calls upon to pray for principles enshrined in the Constitution and preserve secular fabric of the nation. Both the leaders, and others from Hindu supremacists read something that is not there in the letter or want to deliberately draw conclusions to give it a political colour.

Elections are one year later and the letter will be forgotten by most people. Even if remembered, a very tiny section could hardly influence the outcome of elections. Besides, elections are almost always round the corner in some state or the other and such a letter could always be problematized whenever written.

The surge in hate spouted by the Hindu supremacists against non-Hindus is visible to all. To the Hindutva followers, the test of nationalism is neither in following Constitutional values nor in respecting rule of law nor in respecting democratic institutions like the legislature or judiciary. Their test of nationalism asserts supremacy of the privileged upper caste Hindu traditions and is proved only if one says “jai shri Ram”, “Bharat mata ki jai” and singing “Vande mataram” which, often they themselves cannot sing. Variants of these like “jai Hind” which is the tradition in security forces, or hoisting the national tricolour would not do. Expressing nationalism through constitutionally acceptable methods and plural traditions but which are not in conformity with the desires of Hindu supremacist becomes ground for them to indulge in violence and hate crimes. Violence against Muslims, Christians, Dalits and women are on rise. Social hostilities based on religion are on rise, particularly as the Hindu supremacists find an enabling environment where politically influential leaders and even ministers spout hatred against Muslims and Christians. Muslims are often advised to take permanent residency in Pakistan, an enemy state according to Hindu supremacists. Pakistan is projected to be patron state of Muslims in India. The BJP President Amit Shah publicly asserted while campaigning during Bihar Assembly elections – ‘Pakistan will celebrate if BJP loses elections in some innocuous Indian state’. Beef eaters (read: Muslims and Christians) are advised to emigrate to Pakistan (Anil Vij, Minister in Haryana).

Ministers in Central Govt. Sadhvi Niranjan Jyoti publicly stated that Hindus were progeny of Lord Ram (Ramzade) and the rest – Muslims, Christians, Jains, Sikhs, Buddhists, Parsis, atheists who do not accept Lord Ram to be their God are bastards (haramzade). The Sadhvi continues as minister and she was not even reprimanded. Maneka Gandhi, Union Minister said the profit from cow slaughter was financing terrorism. Sakshi Maharaj, BJP MP asserted that Madrasas religious schools run by Muslims were terrorist training centres. The person who asserted that Hindus should forcibly marry 100 Muslim women (and convert them to Hinduism) for every Hindu woman who chooses to marry a Muslim man (and gets converted to Islam), has been made chief minister of UP(FP Staff 2014).

Attacks on Churches and prayer meetings of Christians have dramatically increased. Instead of arresting the criminals, they are sought to be protected by categorising the attacker/s as mentally disturbed person/s. Mob lynching of Muslims and dalits on accusations consuming beef or slaughtering cows have grown manifold in the last four years.

Table – 1: Incidents of mob lynching on accusation of cow slaughter:

Mohd. Afrajul was hacked to death and then burnt alive in Rajsamand (Rajasthan) by Shambhulal Raigar, a follower of Hindu supremacist ideology. He videographed the incident and uploaded for popularity. Junaid Khan and Mohammed Akhlaq were lynched to death. Recently a dalit youth Mukesh Vaniya was beaten to death in Rajkot for refusing to clean up a factory premise belonging to an upper caste. Those who lynched Pehlu Khan to death in Rajasthan have been discharged and the accused freed. Survivors of mob lynchings have on the contrary been charged.

Communal conflicts have escalated. Communal violence has increased in Bihar since Nitish Kumar aligned with the BJP to form the state government. Massive Ram Navmi processions were taken out in March 2018 in several towns through new sensitive routes passing through minority areas in order to provoke and resulting in communal violence. In Kasganj Muslims celebrating Republic Day were asked to halt their Indian flag hoisting to make way for a bike rally of Hindu supremacist and on requesting them to wait a little, they sparked off communal riot. In WB there were riots during Muharram and Ram Navmi. Religious festivals are becoming tense moments for communities.

Crime against women are on increase. Rape in Kathua was motivated by religious hostility and the Hindu Ekta Manch organized massive demonstrations in defence of the accused. BJP MLA in UP has been arrested for raping a child and later beating her father to death along with other accomplice. We could fill pages with sordid cases. If these are not turbulent times, what else could be? The PM of the country has by and large remained silent on all these issues.

Pew Research Centre, an independent non-partisan polling and research organisation, has been publishing its annual Global Restrictions on Religion Report since 2009. In their research, India ranked fourth in the world in 2015 – after Syria, Nigeria and Iraq – as having the highest social hostilities involving religion. India’s ranking worsened sharply since 2014. The report composes of two indices – the Government Restrictions Index and the Social Hostilities Index. While the former measures government restrictions on the free practice of religion, the latter looks at hostilities between groups around the issue of religion. The Social Hostilities Index looks at 13 indicators including crimes motivated by religious hatred, mob violence related to religion, communal violence, religion-related terrorist groups, using force to prevent religious groups from operating, the harassment of women for ‘violating’ religious dress codes and violence over conversion or proselytising. India ranked ‘very high’ on the index with an index value of 8.7 out of 10, 10 being the worst. Syria ranked at 9.2, Nigeria at 9.1 and Iraq at 8.9

Hindu supremacist leaders problematize the Archbishop’s letter as polarizing and influencing voters. Such a conclusion would be a very remote possibility, and as pointed out above, would not influence the outcome. However, appeal by varied Hindu God men is far more direct and materially influences electoral outcomes. To give just a few examples, Haryana Chief Minister and several ministers visited controversial God man Gurmeet Ram Rahim Singh’s Ashram and he is known to have appealed to his followers to vote for the BJP. The Ashram was beneficiary of Haryana Govt. funds. Another controversial God man Asaram was visited by the then Gujarat Chief Minister Narendra Modi, BJP leader Atal Bihari Vajpayee and other leaders and his Ashram in turn has been beneficiary of Govt. largesse in the form of land and ignoring illegal activities going on within the Ashram. BJP leaders visit the Ashram for votes of course.

When other parties approach Imam Bukhari for Muslim votes, then that becomes anti-secular and even anti-national (although election results do not bear out that Muslims vote according to the diktats of Imam Bukhari or for that matter any other Muslim religious leaders. In the 2014 General Elections, Rajnath Singh hobnobbed with Shia religious leaders. It is difficult to believe that during election time such a visit by the BJP leader was only a courtesy call without any electoral and political motive.

The BJP is not worried that innocuous Archbishop’s letter will contribute in any way towards losing even a few votes. Its real objective in problematizing the letter is that it wants to create a fear among the majority community about (non-existing) unity within the minority community. They scare the majority community that unity within minorities would lead to assertion of ‘their’ culture and dilution of the Hindu culture or ‘Hinduness’ of the nation. Minorities would struggle for secularism and space for their culture which is perfectly in accordance with our Constitutional principles but against the political ideology of Hindutva. It is the secularism and loyalty of the minorities to the principles enshrined in the Constitution that worries the Hindu supremacist and the BJP. The BJP leaders have always ridiculed secularism as sickularism. BJP has problematized Archbishop’s letter mainly because being from the minority community he has dared to speak up for the Constitutional principles and secular fabric of our nation.

The revered ideologue of Hindutva – M S Golwalkar – wanted that minorities should dream of nothing but the glory of Hindu (read upper caste) nation and Hindu upper caste traditions and symbols. Hindu supremacists’ objective is to relegate the minorities to the status of second class citizens. Bharatkumar Raut, former Rajya Sabha member of Shiv Sena – a party that subscribes to Hindutva ideology – even wrote an article demanding that the Muslims be disenfranchised – a demand which is punishable offence under section 153B of the IPC.

It is the idea of equality of all citizens that scares the BJP though it pays lip service to sabka saath sabka vikaas (with everyone and development of everyone). The lip service, even in its sincere implementation would actually negate democratic principles enshrined in our Constitution. It only asserts that if infrastructure of an area is developed, all communities would benefit ‘equally’. However, that is not true. If a road passes through a village the fellows having vehicles would benefit more than others in absence of affirmative action; and which village gets the road itself is a political decision and may be based on which community or caste forms the majority in the village.

Share
Previous U.S. Encourages Females in STEM, Unless They Are Afghan
Next Islamic Quotes of Uthman ibn Affan