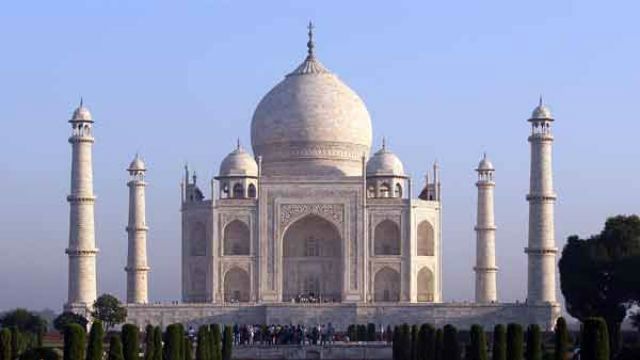 Agra : Welcoming the Supreme Court’s concern over discolouring of the Taj Mahal, the 17th century monument to love in Agra, historian Prof R. Nath, an authority on Mughal architecture, said “mud-pack treatment with ‘Multani Mitti’ was the chief cause (of its browning) and this should be stopped forthwith”.

Talking to IANS on phone from Ajmer, where he has shifted from Agra, Nath said: “I had on dozens of occasions warned that the beauty parlour treatment with Fuller’s Earth would leave permanent scars and make the surface rough for deposits in the ambient air to settle down. In their wisdom, the Archaeological Survey of India (ASI) experts have damaged the original ‘Vajr Lep’, a concoction of paste using local ingradients, to provide a permanent cover.”

Nath said another problem area in respect of the security and safety of the Taj Mahal is the dry river Yamuna.

“On scores of occasions, and in a number of my research papers, I had recorded that Yamuna was an integral part of the Taj Mahal complex and the foundation resting on wells needed water round the year. The state and central governments ignored the warning I had given that the water in the river was necessary to buttress the heavy weight of the main edifice. The dome alone weighs 12,500 tonnes. My fear is some day the huge structure could just cave in,” he said.

You do not need foreign experts to tell you what to do and how to conserve these valuable heritage structures, Nath said.

“The temples in Rajasthan, all marble, Dilwara, Girnar, built in 12th century, stand out sparkling white, without any signs of fatigue. Why is only the Taj Mahal wearing out and looking pale and sick?”

The 80-year-old historian, who has written more than 300 research papers and authored dozens of books on Mughal architecture and history, is deeply pained and anguished. “I am not physically fit, otherwise I would have protested and raised an alarm. The powers that be do not seem interested in preserving history and heritage.”

He accused the ASI of ignoring its own 1923 conservation manual by Sir John Marshall, which prescribes almost everything related to the conservation of protected national monuments and is not convinced of the ASI’s expertise in protecting the monument.

“Cracks are bound to develop in any structure over the years, but they have to be periodically investigated and filled with material that is compatible with the structure,” he said.

The Taj Mahal underwent its first repair in 1652, when there was a leak in its dome. The leak was plugged using ingredients that had waterproofing qualities like pulses, gum and gur, said Nath.

“The lime-mortar mix was used in ancient and medieval times for roofing and for filling the cracks and crevices. Aurangzeb had the Taj repaired with the same materials in several thick layers and the leakage was plugged permanently. The materials used by ASI are a poor substitute to the original,” he said.

“Chances are the pores of the marble slabs would be opened because of the treatment, exposing the stones to environmental onslaughts. The builders of the Taj Mahal gave it a permanent treatment using a ‘desi’ concoction developed after years of painstaking research. This is called the ‘vajra lep’,” Nath said, adding that there was no history of “Multani mitti” being used on large marble buildings in “Greece, Italy or anywhere else in the world”.

“Since it is essentially a bleaching agent, will it not make the Taj’s surface rough and uneven,” he questioned.

Local conservationists, too, are not convinced about the usefulness and safety of treating the Taj Mahal with a mudpack on a regular basis. Experts point out that air pollution in Agra is the main reason for the deteriorating condition of the monument and that the government should focus on that instead.

“If the (previous) treatment was so good, why do they have to give it another one so soon,” asked Surendra Sharma of the Braj Mandal Heritage Conservation Society.

“What this means is that all our efforts to fight environmental pollution in the Taj Trapezium Zone have dismally failed. If pollution has been checked as claimed by the departments concerned, then what are the factors that are disfiguring the Taj Mahal?” Sharma asked.

(Brij Khandelwal can be contacted at brij.k@ians.in )