NEW DELHI, SEPTEMBER 30: Mufti Nasihur Rahman, otherwise a low-profile person, is the Principal of a girls’ madrassa in Mangaldai of Darrang District in Assam. At a time when madrassas and anything to do with madrassas are in the news for wrong reasons, Mufti has hit the headlines, for a second time, for his unique initiative in propagating the importance of sanitation and hygiene in the society in general and in the poverty-stricken Muslim hamlets in particular. So much so that, today the Mufti is more popular as the “Swach Maulana” than by his own name.

Last year, Rahman was honoured with the “Ganga Award” at an international all faith sanitation convention held at Haridwar. This year, Rahman is representing Assam at the “Global Inter Faith Wash Alliance” that has commenced in New Delhi on September 29 and will continue till October 2, 2018. The plenary session of the Alliance was inaugurated by Ram Nath Kovind, President of India, at the Pravasi Bharatiya Kendra, New Delhi on Saturday.

Addressing the inaugural session, Rahman gave a picture of the sanitation awareness programme undertaken by him and his team across the state of Assam since 2016. They have been encouraging people to construct toilets in their villages, maintain cleanliness in houses and public places, and stop defecation in the open in an earnest manner. The Muslim clergies in particular have been convinced to uphold the motto “No toilet, no marriage” and not to conduct any wedding ceremony where the newly wed bride does not find a toilet in her in-law’s house. 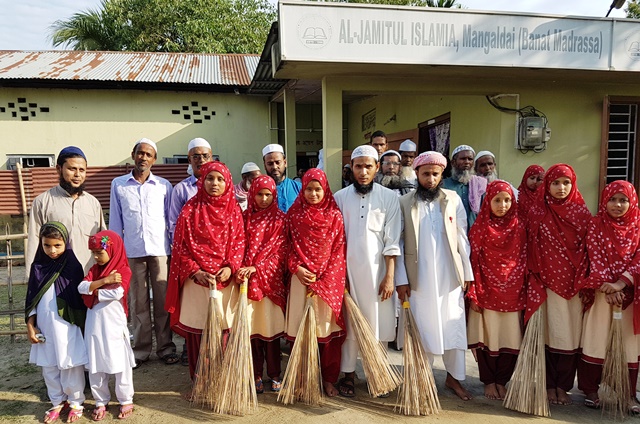 Rahman’s girls’ madrassa in Mangaldai is primarily residential and out of its 150 students, only about ten are day scholars. Ideally situated by the National Highway No 15, this madrassa could become the nucleus for a movement that could revolutionise the mindset of the Muslim community towards health, hygiene and sanitation. Rahman has an ambitious plan to set up a “Swach Bharat Garden” within the madrassa campus to create more awareness among people about health, hygiene, and cleanliness. He is hopeful that the government and people will come forward to turn this plan into a reality very soon.

Vice President of India, M Venkaiah Naidu and Prime Minister Narendra Modi will be present at the launch of Mahatma Gandhi’s 150th Birth Year Celebrations at the Rashtrapati Bhawan Cultural Centre in New Delhi on October 2, 2018 as the grand finale to the wash alliance convention. After attending the final function, Rahman will visit Darul Ulum Deoband in UP, his alma mater and one of the leading Islamic seminaries of the world. He plans to discuss the issue of sanitation and hygiene with the leading faculties there with a view to making it a country wide programme in which Muslim clergies will take a leading role in the implementation of the Swach Bharat programme in the Muslim inhabited areas of the country.