B Team of BJP 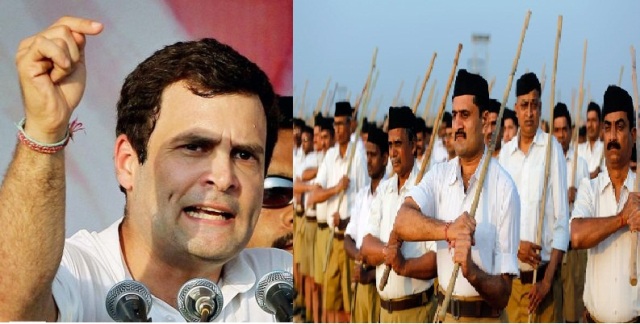 Srinagar: Soaps, face packs, shampoos and medicinal products made from cow urine and dung will soon be just a click away as an RSS-backed centre says it is set to sell these on Amazon. Deen Dayal Dham, a centre run by the RSS in the BJP-ruled Uttar Pradesh, will initially put up a dozen products related to health, beauty and apparel on the website for sale.

Despite the breath-taking progress that the “new India” has seemingly registered under the BJP, one still finds it difficult to process that a global giant like Amazon has jumped on the Hindutva bandwagon to make the killing.

And why not? When it comes to faith or overt religiosity in the name of faith, no one can beat us Indians. What’s wrong if a US conglomerate that pitches itself as ‘apni dukan’ crashes the party to join the likes of yoga guru Baba Ramdev to play on religious sentiments of a billion people, laughing all the way to the bank! When the high and mighty in the land sport their faith on their sleeve, what are hoi polloi supposed to do?

It’s not limited to the bizarre but harmless, if unscientific claims, by Modi about the marvels of Vedic science in ancient India or fascinating theories of the BJP ministers that Taj Mahal is an ancient Shiva temple! The problem is, these bizarre claims and theories are now being embraced and earnestly peddled by the Indian state and its institutions.

For instance, Uttarkhand has become the first Indian state to declare the cow — revered by the Hindus — as ‘rashtra maata’ (mother of the nation). The resolution to this effect was recently passed by the Uttarkhand assembly even as the state high court anointed itself as the “guardian of the sacred cow”!

If Rajasthan has come up with a 20% cow safety cess, Maharashtra is planning a ‘cow service commission’ whose responsibilities would include monitoring cow shelters in the state and assisting businesses that could “generate power and biogas from milk, urine and cow dung.”

In Madhya Pradesh, a Hindu priest has been appointed the head of the Cow Protection Board with the rank of a cabinet minister and all the necessary paraphernalia. Indeed, in one of India’s largest states in the Hindi heartland, all heads of Hindu ‘matts’ (cloisters or monasteries) have been given the ranks of cabinet ministers.
Haryana, which boasts the distinction of lynching most Muslims in the past year or two has a whole ministry dedicated to the sacred cow. The same progressive state bordering Delhi and home to shining metropolises like Gurgaon has banned Friday Muslim prayers in public. Another village in Haryana has imposed a ban on beards, skullcaps and even Muslim names!

Pandit Nehru, Dr Ambedkar and other architects of India’s liberal constitution must be tossing and turning in their graves over this sudden lurch to the right and unprecedented intolerance! While India has always been a fiercely religious country, these expressions of faith have never bordered on the unreasonable or threatened the democratic character and secular ethos of the republic. Under the current order, all that has changed.

As veteran journalist and editor Samar Halarnkar notes in Scroll: “India was always the land of the strange and the home of the insecure, a place of milk-drinking idols, sadhus in stasis and imagined offences. Yet, for all its peculiarities, India did not take itself very seriously – at least not at the level of government. That is changing as the bizarre and the absurd transform into government policy, and Indian politicians and states are locked in a race to the bottom.”

Even more disturbingly, the new trend of pseudo religiosity in public life, pioneered by the BJP, is now being emulated by the Congress, the grand old party that led India to Independence.

In the desperate ongoing electoral battle in Madhya Pradesh, a senior Congress leader and former federal minister has promised to “rebuild” the Ram Van Gaman path, a mythical route that Lord Rama apparently took during his exile, if the party is voted into power. He has also promised to build a magnificent Ram temple in the state even as he insists he does not believe in exploiting religious sentiments for votes. Another Congress veteran has promised a gaushala, or home for cows, in every district of the state if the party is returned to power.

Understandably, after long years in opposition, the Congress cannot wait to return to power. But must it abandon all reason and common sense and, more importantly, its much trumpeted secular traditions and beliefs for office? Apart from shamelessly pandering to the same majoritarian sensibilities that the BJP has been courting, such an approach only makes the Congress appear like the ‘B’ team of the BJP. And why would the voters settle for watered version of Hindutva when they can get the original, unadulterated stuff!

Unlike many pundits though who have baulked at Rahul Gandhi’s temple trekking across the country, including the recent 12-day long yatra to Kailash Mansarovar in the Himalayas, home to a famous Shiva temple, I have no issues with these pilgrimages, if they can help the grand old party counter the BJP’s sectarian agenda and revive its support base.

After all, the BJP does not have ownership rights over Hinduism or the Hindus. Besides, like you and me, politicians are entitled to their faith and so is the Congress president.

There is a difference between practising your religious beliefs and exploiting them for votes and political gains. Keeping faith and sowing strife and hatred in the name of faith are two quite different things.

Great leaders like Mahatma Gandhi, Maulana Azad and Maulana Mohammed Ali Jauhar (the last two being Rahul’s eminent predecessors as successful Congress presidents) took pride in their faith and religious identity. Faith for them was a source of strength and spiritual sustenance. They used it to build bridges between communities; not divide them by creating false insecurities.

Rahul Gandhi’s Congress can reclaim its pride of place as India’s natural party of governance by promoting religious tolerance and genuinely celebrating the nation’s religious and cultural diversity, and not through inane religious tokenism, the kind one has been seeing in the poll-bound Madhya Pradesh and elsewhere.

More importantly, the Congress and other secular parties need to highlight the dangers of the BJP and Parivar’s politics of hate and the lasting damage it has been inflicting on the country’s political and democratic institutions, not to mention the infamy and embarrassment that it has brought India in the eyes of the world.

Religious minorities, especially Muslims, and marginalised communities like Dalits have never been more vulnerable. Not a day passes without some innocent Muslim being lynched somewhere in the country in the name of cow, love jihad and other pretexts and no one even bats an eye. The regime that never tires of trumpeting ‘sab ka sath, sab ka vikas’ (Inclusion and progress for everyone) has practically normalised the killing of Muslims. So much so that they do not even get reported by the media. Terrorists from groups like Bajrang Dal and Hindu Vahini proudly carry out these lychings and killings in broad daylight without any fear of the long arm of the law.

This is perhaps what RSS supremo Mohan Bhagwat perhaps had in mind when he insisted last week that Hindutva is incomplete without Muslims. Indeed, yes. Who else would they turn to as the bogey to instigate and unite the Hindus!

Of course, Hindutva wants Muslims. Only they need to lose their Muslim identity, be suitably servile, stop eating anything that breathes or walks and demand no rights. In short, Muslims should act, talk and look like, well, Hindus or ‘Hindu Muslims’ as the RSS calls them.