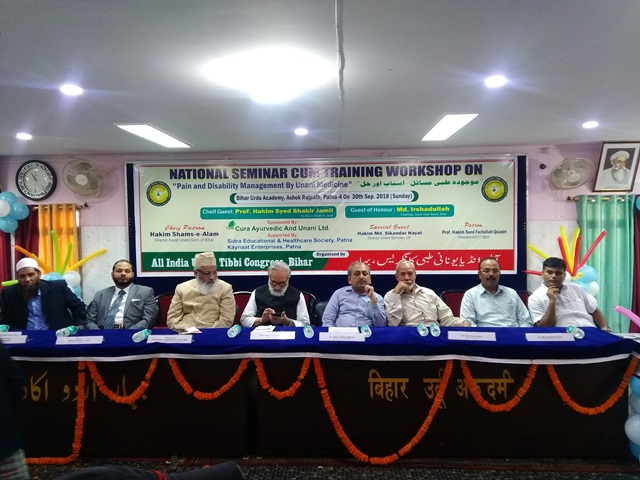 Patna: The first ever state-level  seminar-cum-convention on the Unani medicine was organized by the All India Unani Tibbi Congress’s Bihar unit here demanding a new Unani medical college and up-grading the old government Unani college to  the  level of  AIIMS. The seminar also demanded that the Bihar government must fill all Unani posts lying vacant for long-time in the state and treat Unani system of medicine at par with other Indian traditional system of medicines.

The well-attended seminar held in the Bihar Urdu Academy auditorium on Sunday deliberated upon the problems and issues confronting the Unani physicians, students and academics in Bihar as well as in the country. Many speakers and experts highlighted Bihar’s contribution in promotion of Unani in the past and asked the audience mostly comprising of Unani medicine students to excel in the field and come out from the inferiority complex.

In his presidential remarks, the patron of Bihar Unit Prof Fazalullah Quadri shed the light on the history of Unani medicine in Bihar province. Bihar had a glorious past in Unani medicine which was the third important place after Delhi and Lucknow and produced a number of distinguished Unani physicians and academics who had immensely contributed to the development of Unani tibb, he said.  It is unfortunate that after the independence, Unani Tibb lost it momentum of progress because successive governments had ignored it, said Prof Quadri and added that not a single new Unani college was built by the state government or the existing college was given permission to start post graduate courses.  Lauding the efforts of Dr. Syed Ahmad Khan, secretary general of All India Tibbi Congress, Prof Quadri said he has been leading-light and infuse new life in the Tibbi Congress.

Bihar Sunni Waqf Board chairman, Mohammad Irshadullah, who was the Chief Guest, stressed the need of doing research in Unani medicine to compete with other medicines. He said the present Bihar government is committed for the progress of Unani medicine.

Another official from the Bihar government, Imtiyaz Karimee said the Unani students must come out from inferiority complex as   whatever is being taught in modern medical science, our fore fathers were the pioneers of this.

Dr Mohammad Abdus Slaam, the organizer of the Seminar, said   by organizing this seminar and workshop, we tried to create awareness about the Unani medicine’s efficacy and effectiveness.

Echoing his view, Dr Mohammad Sikandar Hayat   Siddiqui   pointed out that Unani Tibb has been facing four big problems in the country.  One of the major problems is about academic which needs special focus and asked the students to improve skills. He also threw light on the state of Unani medicine in Uttar Pradesh where he is the director on Unani medicine in the UP government.

Presenting the report card of the Tibbi Congress, Dr. Syed Ahmad Khan, secretary general of All India Tibbi Congress said by organizing this seminar for the first time after the Independence the Bihar unit has done a commendable job. He said it was unfortunate that Bihar did not get any new Unani College and we must make pressure on the government for this.  He said the Tibbi Congress has achieved many feats in the cause of Unani medicine.  Because of Tibbi Congress sustained efforts and representations, Uttrakhand and Rajasthan governments have been building new Unani colleges in their respective states. In other states also Tibbi Congress has been successful in addressing the issues-related to Unani medicine, he said.

In a candid speech, Dr Mohammad Ubaidullah Baig, the chairman, Tibbi Congress youth wing, who is also International UN Ambassador for Peace, said  the Unani physicians did not share their experiences with fellow physicians that is hampering the growth of this medicine which it has been serving the humanity for the last five thousand years.  Later, he also delivered a lecture on the topic ‘Pain and Disability Management’.

Earlier, former the Director General of the   Central Council for Research in Unani Medicine (CCRUM), Prof (Dr) Syed Shakir Jamil delivered a lecture on “Principles of Treatment of Some Newly Emerging and Common Diseases”. He said if Unani proves beneficial to the mankind then it will survive, nobody can annihilate it. He urged the students to excel and serve the people sincerely.

On the occasion, a number of books including the book “Ilmul amraz key Muntakhib Sawalaat” written by Dr Mohmmad Shamim Akhtarwere also released.