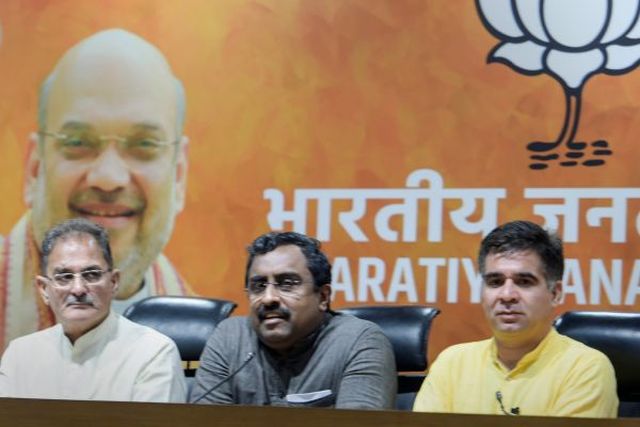 New Delhi : More than three years after they formed an uneasy coalition, the BJP on Tuesday pulled out of the PDP-led Jammu and Kashmir government, citing growing terror activities and radicalization in the valley making its continuance “untenable”.

The move came less than a year ahead of the 2019 general elections and a couple of months after the BJP had replaced its Deputy Chief Minister in the wake of outrage over Kathua rape incident.

It also came two days after the Centre decided not to continue with the ceasefire.

“It has become untenable for the BJP to continue the alliance in Jammu and Kashmir in the situation that has developed today. Terrorism and violence have increased in the valley and radicalization is fast spreading. Fundamental rights of citizens and right to free speech of people have come under threat in the valley as symbolized by the murder of senior journalist Shujaat Bukhari in broad daylight in Srinagar,” Madhav said.

The People’s Democratic Party (PDP) and the BJP formed a coalition more than two months after the December 2014 elections returned a hung verdict, in which the PDP got 28 seats and the BJP 25, while the National Conference with 15 and Congress managed to win 12 in a House of 89. The government came to power on March 1, 2015.

The BJP leader said that the coalition was formed with an intention of restoring peace in Kashmir and encouraging fast development in all the three regions of the state including Jammu and Ladakh.

“The BJP did its best to give a good government. The Centre had also given a package of Rs 80,000 crore. The Home Minister (Rajnath Singh) had made several visit to the state and the central government had also appointed a interlocutor in a sincere attempt to resolve issues in Kashmir. On the border also, we took steps to contain violence by erecting 4,000 bunkers. Whatever the state government wanted we were ready to give,” he said.

But, Madhav said, they were sad that the government failed to discharge its responsibilities and the feeling of discrimination towards Jammu and Ladakh regions continued.

“After three years, today we have come to the conclusion that in the interest of the entire nation of which Jammu and Kashmir is inalienable part and in the interest of integrity and sovereignty of the country, keeping in mind the larger interest of the security, in order to bring situation under control, we have decided that is it time the reins of power be handed to the Governor for a spell of Governor’s rule. After the situation is restored, we will consider what to do in the future and take the political process forward,” he said.

He said the ceasefire was announced by the Centre with the intention of bringing peace to the state and to give relief to the people of Kashmir during the holy month of Ramadan. “It was our hope that we will get a good response from terrorists and separatist forces like Hurriyat. We were under no compulsion. It was a goodwill gesture and we did it from a position of strength,” he said.

Madhav also said that over 600 terrorists have been neutralized in the last three years to stop radicalization. “Our campaign against terrorist will continue and there is no doubt about it. That is why we are going out.”

Replying to questions, he said apart from the reasons given, there were no other reasons for the decision to pull out of the government. “We are not concerned about losing ground in the state.”

He said the coalition was formed to respect the mandate of the elections and two parties came together and tried to give governance.

He said that state has faced such situation in the past when there was rising violence and periods of it being controlled. “All we are saying now is we have come to the conclusion that in present scenario and in the present juncture, we find our continuance untenable.”