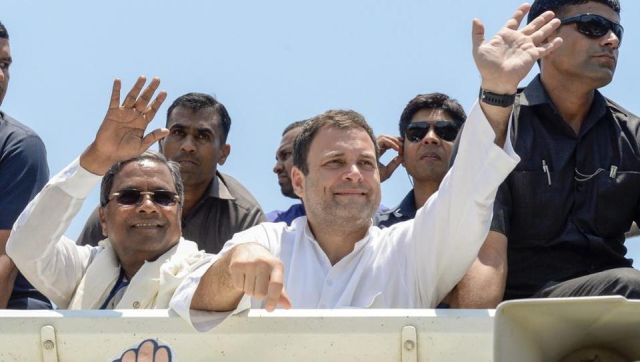 New Delhi : The Congress was allegedly seeking votes on communal grounds and also using money power in Karnataka in violation of the electoral laws, the BJP on Wednesday told the Election Commission.

It also sought action against state officials who are “demonstrating leanings towards the ruling political dispensation” ahead of the May 12 assembly elections.

They also submitted a memorandum wherein it also stated that delay in granting permissions by the state officials was hurting its election campaign.

The delegation also sought the constituencies of Belgaum North, Gokak, Yemakanmardi, Badami and Bableshwar be declared “critical” and Central Armed Police Forces and micro observers “be deployed forthwith to ensure a level playing field for all parties”.

“In a public meeting on May 1 at Kalaburagi in Karnataka, Congress leaders Ghulam Nabi Azad and Mallikarjun Kharge appealed to Muslims to cast their vote en masse in favour of the Congress candidates. This is a clear violation of the Model Code of Conduct and a criminal offence under the provisions of Representation of People’s Act, 1951,” the BJP memorandum said.

“This desperate misadventure of the Congress party is an offence against the community and a bid to divide the otherwise peace loving communities of Karnataka. The BJP urges the Commission to act decisively and firmly against such attempts of the Congress Party,” it added.

It also complained that there had been “unduly long delays in according permission for even small and routine requests being made by Bharatiya Janata Party (BJP) candidates and workers”.

“Most often, the permissions are neither denied nor approved, thus leaving the candidates in state of confusion and hence hurting the party’s election campaign,” it said.

The BJP has asked the EC to direct the District Electoral Officers and the General Observers to “personally oversee” such requests and be held “personally accountable” for the alleged delays.