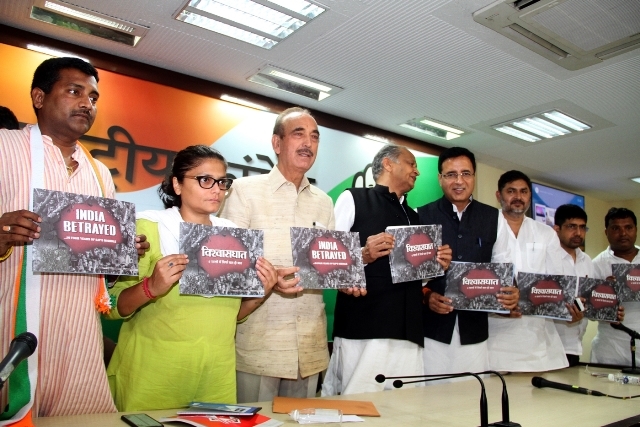 New Delhi:  Describing four years of the Modi Government in four words – “Treachery; Trickery, Revenge, and Life”,  senior Congress leaders on Saturday released a  41-page document titled as ‘India Betrayed’ which exposes the Prime  Minister Narendra Modi’s ‘betrayal’ with the people. They also said insecurity among Dalits, minorities and weaker sections have been increased manifold since this government came to power.

Speaking after the release of the document on the completion of four years in office by the Modi government here at Congress headquarters, Party Communication head Randeep Singh Surjewala said “India betrayed in four years of BJP’s misrule and the ruling party should now be renamed officially as “Betrayal Janata Party”.

He said after “spending Rs. 4,600 crore on insurmountable advertisements”, PM Modi is in the perpetual campaign but refuses to understand peoples’ pain.

Speaking on the occasion, senior Congress leader Ghulam Nabi Azad said the Prime Minister failed to keep his promise on national security and let down security forces. He accused the ruling party of using Kashmir for its ‘petty politics’.

“Kashmir is a state which was exploited by Modi most during the elections. In the recent past, ever since things had normalized in Jammu and Kashmir post-1996, the highest number of security forces and civilians were killed in the four years of Modi government.”

Hitting out at the BJP for the politics of the polarization, Azad said under this government nobody is safe.  He said national security also means that the country has peace and harmony but that is least at the moment.

Whether, the downtrodden, the minorities, SCs, poor people have-nots are secure, they are not. Whether there is freedom of speech, freedom of expression, that is not whether the media persons are safe, be electronic and particularly the print media – they are not safe. So nobody is safe. Under Modi’s government, nobody is safe.”

He said journalists who speak against the government are under attack and they are getting death warrants straight not from the militants but not from the associates of the ruling party and organizations very close to the Modi government.

This is unheard in any part of the world, he added.

The party also attacked the PM on the economic situation. Azad said in spite of manipulations and favorable changes in GDP calculation, India’s GDP is the lowest in four years in comparison to the previous UPA government’s tenure.

Another party senior leader Ashok Gehlot also hit at the PM saying  “No other Prime Minister has ever lowered down the dignity of the post of PM like Modi.”

Besides releasing the document, Congress party’s all the frontal organizations’ heads of Indian Youth Congress, All India Mahila Congress, Seva Dal and NSUI have jointly led the protest to mark the cruel completion of 4 years of Modi government in the national capital.  Agitating party workers also courted arrest to protest the policies of the government.