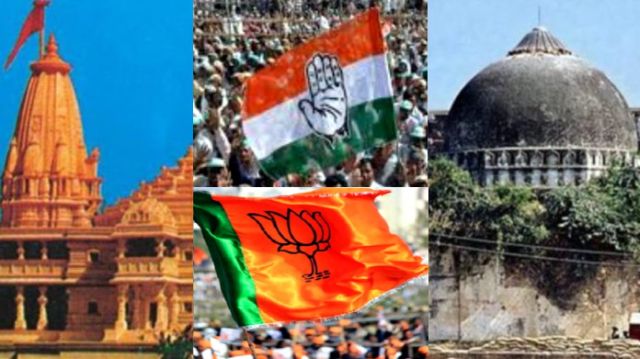 New Delhi : The BJP on Monday accused the Congress of trying to build a momentum against the construction of the Ram Temple at Ayodhya and asked party President Rahul Gandhi to clear his stand on the issue.

“They are trying to build a momentum against the construction of Ram Temple. We want an early verdict but they are trying to delay,” BJP Spokesperson G.V.L. Narasimha Rao told a press conference.

His comments came in the wake of the reported remarks of Congress leader and Thiruvananthapuram MP Shashi Tharoor. who said on Sunday that while a vast majority of Hindus believe that Ayodhya was the birthplace of Lord Ram, no good Hindu would want to see a Ram temple built by demolishing somebody else’s place of worship.

Rao said Tharoor’s comments is yet another attempt to somehow “muddy waters” at a time when the Supreme Court is likely to take up this issue on a fast-track basis.

“Linking construction of temple to demolition of the structure several years ago is an attempt by the Congress to indulge in vote bank politics,” he said.

Rao said that the BJP hopes for an early verdict in this regard while many of the Congress leaders are again and again giving statements against the construction of the Ram Mandir at Ayodhya.

Senior Congress leader Kapil Sibal had earlier demanded that the Ram Janambhoomi-Babri Masjid dispute should be heard after the 2019 general elections which triggered a major political storm.

“Rahul Gandhi sometimes turns into a Shiv Bhakt and then goes to meet the intellectuals to say that they are a party for the Muslims. He should answer whether he is a Hindu or not. Will Rahul clearly speak about his party’s stand on Ram temple,” he said.

On his part, Tharoor accused the media of distorting his words vis-a-vis the Ram temple issue and stressed that whatever he said was his personal opinion and not his party’s opinion.

“I condemn the malicious distortion of my words by some media in the service of political masters. I had said, ‘Most Hindus would want a temple at what they believe to be Ram’s birthplace. But no good Hindu would want it to be built by destroying another’s place of worship’,” Tharoor said in a tweet.

“I was asked for my personal opinion at a literary festival and gave it as such. I am not a spokesperson for my party and did not claim to be speaking for it,” he added.