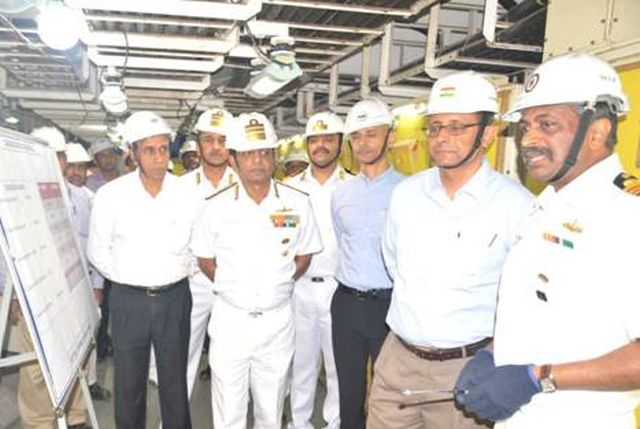 Kochi : Defence Secretary Sanjay Mitra had an on-board briefing on the progress of the Indigenous Aircraft Carrier (IAC) – one of the first aircraft carriers to be designed and built in India, an official statement said.

During his visit to the Cochin Shipyard Limited (CSL), Mitra was given a first-hand briefing on the progress of the IAC by Commodore Cyril Thomas, the Warship Production Superintendent.

CSL’s Chairman and Managing Director Madhu S Nair highlighted the shipyard’s focus on outfitting and trial activities as the project entered its final phase, and reiterated its commitment to meet the deadlines for delivery of the ship.

The 860 feet Indigenous Aircraft Carrier (IAC) features STOBAR (Short Take Off But Arrested Recovery) which will give it a ski jump for take off just like the INS Vikramaditya.

The ship was launched in August 2013 and presently, the main propulsion plant, power generation equipment, deck machinery and auxiliary equipment have been installed and integrated on board.

“Outfitting of various aviation equipment, navigation and communication equipment, weapons and sensors are progressing. In-house trials of ship’s systems by the carrier acceptance and trials team have already commenced and the sea trials are expected to commence by early 2020,” said the statement.

Share
Previous Only Person Who Heard Rahul’s ‘Muslim Party’ Remark Was Reporter Who Wasn’t Present
Next Terrorism not a clash between Christian West and Islam: David Cameron