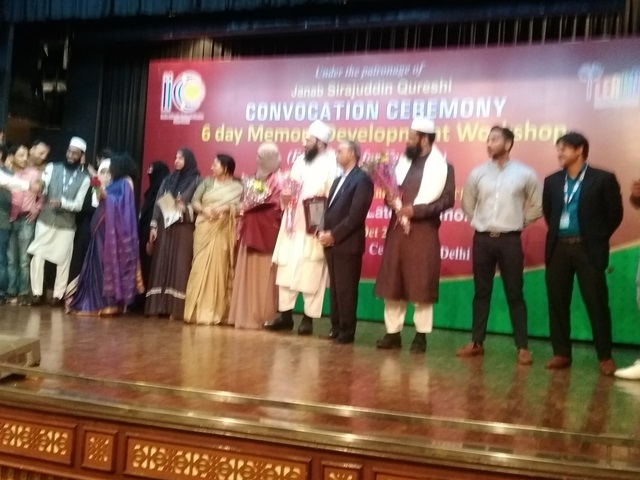 New Delhi:  As many as 400 teachers from Delhi and other parts of the country attended 6-day Memory Training Workshop organized by the Hyderabad-based ‘Learn Maximum’ in collaboration with the India Islamic Cultural Centre at its auditorium here which was concluded Thursday successfully under the guidance of world-renowned trainer Mohammed Abdul Lateef Khan.

It was the 11th memory workshop in the National Capital conducted by the ‘Learn Maximum’ which is an arm of the MS Academy founded by Khan himself way back in 1991. The workshop was exclusive for teachers which revolved around three main themes ‘mind-mapping, memory skills, and speed reading.

Talking to Muslim Mirror, many teachers said they have learnt immensely and improved their teaching skills from the workshop. Afsana Anjum, who teaches English and Urdu at Deoband’s Nai Roshani Public school, said she learned a lot from the workshop particularly mind-mapping that is a very critical skill for any teacher.

Another participant, Shasta Jabeen of M S Creative School, said the workshop enhanced my communication and reading skills. I have learned many things here which were not in the curriculum of the teaching courses, she added.

Besides Delhi, teachers from Kolkata, Luck now, Agra, Kanpur, Roorkee and other places participated in the programme and improved and enhanced their teaching skills.

Furthermore, teachers from reputed schools such as Kalka Public School, Guru Nank Public School etc also attended the workshop. This shows the popularity of the training programme which was earlier launched for students but for the last two years, it has been arranged for teachers of pre-primary to higher secondary.

The three power-packed sessions were conducted and supervised by Lateef Khan who is a recognized Senior ThinkBuzan Licensed Instructor (TLI) in Mind Mapping, Memory Skills and Speed Reading. He was assisted by Nuzhat Khan and Habibur Rehman.

Lateef Khan, who is the real spirit behind this programme and  revolutionized this concept of education across the country, said  the memory workshop has been successful in boosting confidence, personality development,  and improving learning skills in students as well  as teachers. Since its inception in 1991, the MS Academy has trained and taught more than 25,000 people.

When asked what did motivate him to take plunge in the field of education as he is a trained engineer? He said he had suffered a lot during the studies and wanted that the disadvantaged students like him should not face such problems in their studies.

Lateef Khan, who conferred the certificates to the teachers for the successful completion of the workshop, said we have now been focusing on teachers instead students as a teacher can reach out to at least 50 students.

When asked why teachers only from private schools were seen in the workshop? He said we have approached all government schools in Delhi but they did not turn in large number. We have learnt that the Delhi government wants a separate workshop for the government teachers.

Such skills development workshops assume much importance in the backdrop of falling education standards in the country.

Share
Previous Zaheeruddin Ali Khan urges Muslims to vote wisely in 2019
Next Kailash Satyarthi, could you not find more worthy haulers of peace than the RSS?