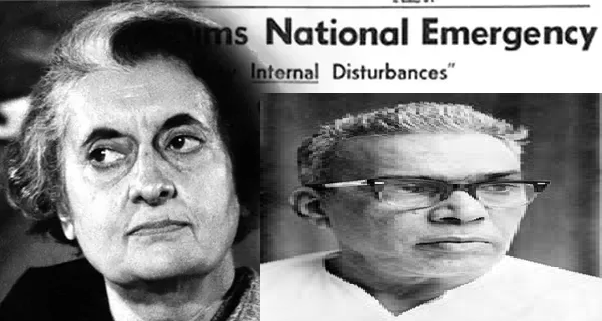 I do not hold any brief for Indira Gandhi as far her decision to impose emergency is concerned. There is no doubt that emergency period will be recorded as a black chapter in the democratic history of the country. But certainly I have every reason to differ with Arun Jaitely when he compares Indira Gandhi with Hitler.

Hitler perhaps was the cruellest ruler in the history of mankind. Besides destroying all the democratic institutions of Germany, which had a glorious history of democracy. He targeted one particular community (Jews) and wanted their total physical annihilation. But Indira did not target any particular community. In our country there are leaders who orchestrated the genocide of people belonging to particular community in Gujarat. Hitler’s cruelty did not have any limits. Because of his brutal attitude even great scientist like Albert Einstein had to leave his motherland. But during the emergency there is no record that anybody left India because of the so called atrocities committed by Indira Gandhi’s dictatorial regime. On the contrary stalwarts like Jayaprakash Narayan were allowed the access to highest possible medical help. Similarly J. B. Kriplani, a great freedom fighter and Gandhi’s chosen disciple was not arrested despite the fact he continued to lead public stir against emergency. In fact Kriplani complained that he had been left out while all his friends were given the privilege of imprisonment.

Hitler not only destroyed democracy but destroyed Germany itself. But Jaitely must appreciate the fact that Indira restored democracy, ordered elections fully knowing that total annihilation awaits her. Perhaps, she was aware that the voters are going to punish her severely for her decision to impose emergency. Here I will like to draw attention that if the emergency was so bad why the then Chief of the RSS congratulated Indira Gandhi when the Supreme Court gave judgment in her favour.

MD Deoras, in his letter written from Yerwada Central Jail, dated 10thNovember 1975 wrote “Respected Smt. Gandhi, Prime Minister Government of India, New Delhi, let me congratulate you and five judges of the Supreme Court have declared the validity of your election”. Prior to that Deoras in his letter written from Yerwada Jail dated 22nd August 1975 addressed to Mrs. Gandhi stated “Respectful Namaskar from the Jail, I listened with rapt attention to your broadcast message relayed from the AIR and address to the nation on August 15, 1975. Your speech was suitable for the occasion and well balanced. I took my pen to write this letter.” In this letter Deoras praised the programme which Mrs. Gandhi announced in the course of his speech. Deoras writes “as you said in your speech delivered on 15th August 1975 inviting the entire country to this work, it was most befitting occasion and the time”.

At present the BJP and the RSS claim that they were the main opponents of the emergency and it was largely due to their struggle that the emergency was lifted. But the fact is that the RSS assured Mrs. Gandhi that the Sangh keeps itself aloof from the power politics. In the same letter dated 10th November 1975 Deoras writes “The Sangh has been referred to in connection with the movement of Jaya Prakash Narayan. The name of the Sangh has been linked with the Bihar and Gujarat movements again and again and without any cause. In reference to the clarification of the fact that the “Sangh has no connection with these movements.”

Deoras repeatedly reassured the Prime Minister to “set free thousands of RSS workers and remove the restriction on the Sangh. If done so power of selfless work on the part of lakhs of RSS volunteers will be utilised for national upliftment (government as well as non-government)”.

Deoras also sought the help of Vinoba Bhave in lifting the ban on the RSS. He wrote from St. George’s Hospital’s prison ward no. 14, Bombay. Deoras writes “at the feet of respected Acharya Vinobaji, this is my prayer to you that you kindly try to remove the wrong notion of the Prime Minister about the Sangh and as a result of which the RSS volunteers will be set free. The ban on the Sangh will be lifted and such a condition will prevail as to enable the volunteers of the Sangh to participate in the planned programme of action relating to country’s progress and prosperity under the leadership of the Prime Minister. Prayer for your blessings.”

Shri Jaitely claims that Indira Gandhi was like Hitler, why the Sangh, of which you were part in 1975 and even now, top boss accepted Indira Gandhi as his leader. It may be mentioned here that Vinod Dua in his popular programme “Jan Gan Man Ki Baat” has termed Deoras’s letters as piece of apology.

During emergency a slogan was very popular. The slogan was “Emergency ke teen dalal, Vidya, Sanjay, Bansilal”. At that time Vidya Charan Shukla was the Information & Broadcasting Minister, Bansilal was the Defence Minister and Sanjay Gandhi was the most confident person of Indira Gandhi (Sanjay was the younger son of Indira Gandhi). All these three were the main executioner of the emergency. Later BJP co-opted both V. C. Shukla and Bansilal. V. C. Shukla contested Lok Sabha election on BJP ticket, BJP became part of the Haryana state ministry headed by Bansilal. Sanjay died in an air crash in 1980 but BJP admitted his wife Maneka Gandhi in the party and made her Central Minster and she continues to be so. To the best of our information Maneka Gandhi did not condemn the emergency so far. If Indira was like Hitler then VC, Bansilal and Sanjay Gandhi were her main commanders. Shah Commission, which the Janata Government constituted to enquire into atrocities during emergency found them guilty of doing several acts to enforce provisions of emergency. It was V. C. Shukla who monitored the censorship on media. What happened that the BJP rewarded Shukla? This was the volte face of the BJP which is political wing of the RSS.

In the end it may be mentioned that RSS has admiration for Hitler. This admiration was reflected in some school textbooks of Gujarat. There was hue and cry against the act of the Gujarat government and then laudable references to Hitler were removed.

Previous How Mobs and Lynchings become handmaiden to anarchy?
Next UP SC/ST panel issues notice to AMU over lack of quota system