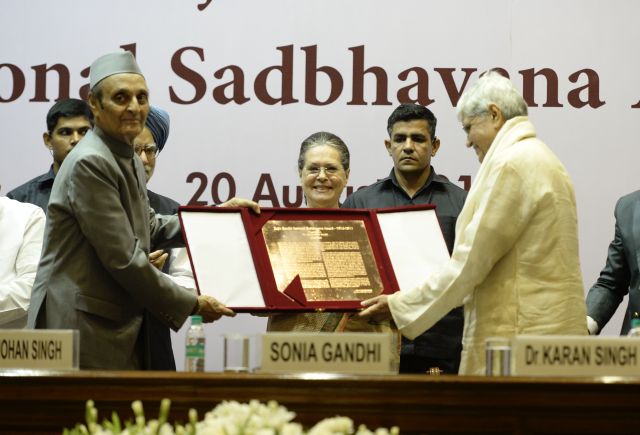 By Abdul Bari Masoud for MuslimMirro.com,

New Delhi: Indirectly attacking the present government on the issue of growing intolerance at the of Rajiv Gandhi National Sadbhavna Award ceremony here, former Prime Minister Dr. Manmohan Singh on Monday warned that it would “harm the national interest” of the country. Without taking the name of the government, he said the country has been witnessing a disturbing trend over the past few years.

Noted civil servant, diplomat and former West Bengal governor Gopal Krishna Gandhi, who is also the grandson of Gandhi ji, was conferred this year’s Rajiv Gandhi National Sadbhavna Award. Speaking on the occasion, Dr Singh said today’s function is a celebration of Rajiv Gandhi’s outstanding contribution to promotion of peace, national integration and communal harmony, but it is also a solemn occasion on two counts.

Dr Singh said it is a “cause for solemn reflection today is some disturbing trend that the country has been witnessing over the past few years”.

Those unsavory trends of growing intolerance, communal polarization, growing incidence of violent crimes propelled by hatred of certain groups and of mobs taking the law in their own hand can only harm the national interest of our country, he added.

“These are an anathema to the promotion of peace, national integration and communal harmony, which are the cherished objectives enshrined in our magnificent Constitution. All of us perhaps need to pause and reflect on how we can go together and contribute to arresting these trends, the former PM exhorted. 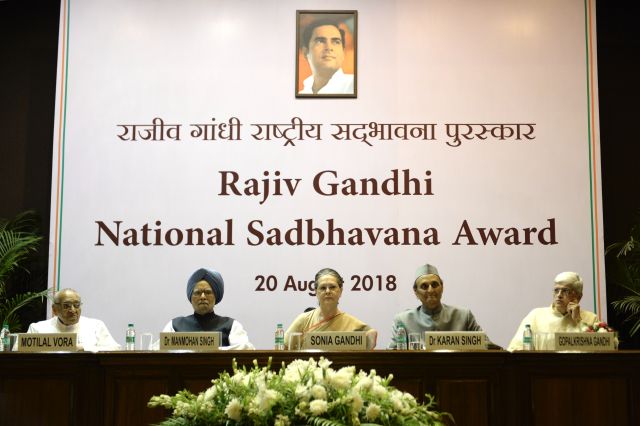 Sonia Gandhi, UPA chairperson also spoke on the occasion and echoed the views of Dr Singh. She said the congress rejects and fight against those ideologies which negate composite and diverse nature of the country. She said by conferring this award to Gopal Gandhi, the Congress expressed its resolve of fighting the forces of divisiveness, hate and bigotry.

“In conferring this award on him, we collectively express our resolve to oppose the ideologies that reject the composite essence of our nationhood and to fight the forces of divisiveness, hate and bigotry.”

In his thanksgiving speech, Gopal Gandhi also attacked the communal forces saying they are destroying the very social fabric of the society.