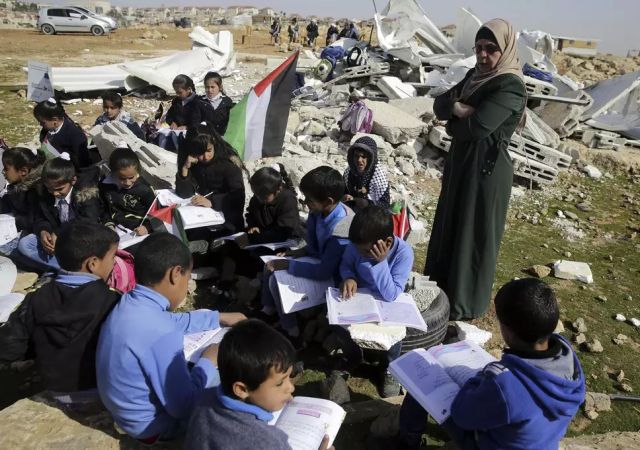 Khalat Aldabie (West Bank) : Scuffles broke out between Palestinians and Israeli troops in the southern West Bank on Wednesday during the demolition of a school.

Portable units in the village of Khallet Athaba serving as a school to Palestinian children were hauled onto the back of a truck to be removed from the site in Area C, Efe news reported.

Palestinians protested against the school’s removal, leading to scuffles with members of the Israeli security forces at the site to oversee the demolition operation.

Children shouted, “we have the right to education”, as they watched their school being taken away.

The school, which was attended by 13 students aged between 6-10 years old, had been made up of four caravans and had a teaching staff of four. Area C, where the school was located, is under the control of Israeli authorities.

A total of 197 Palestinian structures have been demolished or seized by Israel in the first half of 2018, according to a report released by the UN Office for the Coordination of Humanitarian Affairs.

“Demolitions and seizures resumed in mid-June, following the end of the month of Ramadan, with a total of 22 Palestinian-owned structures targeted, displacing 10 Palestinians and otherwise affecting more than 120,” the report said.