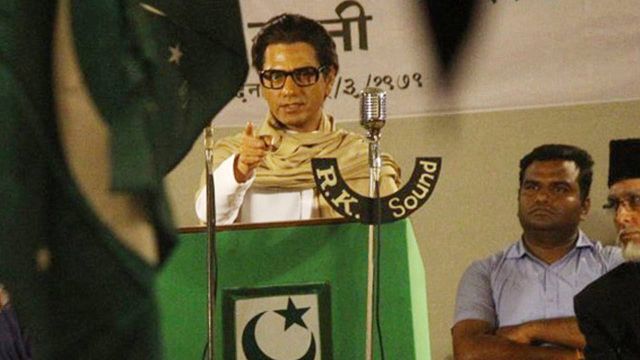 Mumbai : On Shiv Sena Foundation Day on Tuesday, actor Nawazuddin Siddiqui, who essays the political party’s late supremo Bal Thackeray in an upcoming biopic, says doing the movie is quite an experience.

Nawazuddin moved dates and schedules to be a part of “Thackeray”.

“Balasaheb Thackeray was a transparent personality who empowered the common man and it is a lifetime experience essaying him,” Nawazuddin said in a statement.

The actor, along with Shiv Sena spokesperson Sanjay Raut and Shrikant Bhasi, Founder and Chairman of Carnival Group, spent time on the sets of the Raut’ers Entertainment’s movie on the eve of Shiv Sena Foundation Day.

Raut, who believes “Balasaheb made the common man into superman”, said that while director Abhijit Panse was scouting for the right actor, he always had Nawazuddin’s face in his mind.

“I knew Nawaz bhai was the right one. And the moment I set my eyes on him when he walked into our meeting room, he was locked in my head,” he said.

Bhasi said: “Balasaheb Thackeray is the tiger who took the nation by storm, a persona who no one can ever match. We are glad to be associated with ‘Thackeray’, a film that boasts of the penmanship of Sanjay Raut and the histrionics of Nawazuddin Siddiqui.”

The movie will release next year.

In the 1680s, a Safavid embassy en route to Southeast Asia stopped briefly in Madras, …