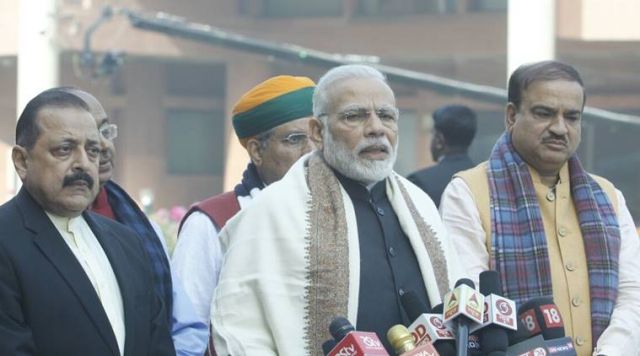 “We could not pass the Triple Talaq Bill in last Parliament session. But I want to urge all the political parties to pass that bill in the Budget Session as it is meant to safeguard the rights of Muslim women,” Modi told the media in Parliament.

The Prime Minister’s remarks came just before the opening of the Budget Session of Parliament.

The government had failed to get the Muslim Women (Protection of Rights on Marriage) Bill, 2017 also known as the Triple Talaq Bill passed in the Rajya Sabha during the Winter Session that concluded on January 5.

Modi also said that “the Budget Session is important and the entire world is extremely optimistic about India”.

“Even several credit rating agencies like World Bank have given positive opinion about India,” Modi said.

“The budget will add new vigour to India’s development and will fulfil aspirations of the people,” he said.

He also said that in this session the parties would get a month’s time and they should make most use of our healthy system of parliamentary committees and discuss various aspects of the budget.

“Let us think about the well-being of rural India, our farmers, Dalits, tribal communities, labourers,” the Prime Minister added.