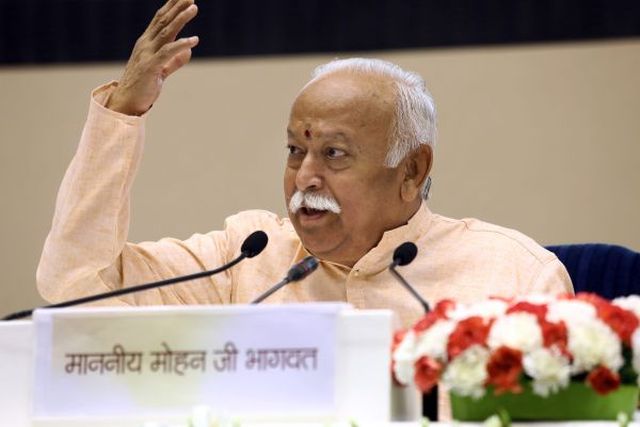 There is a Sanskrit proverb, “angara saata dhautena malinatwam naa jayete” which means coal will not shed its black colour even if you wash it hundred times; the inherent nature cannot be changed and this squarely applies to the Rashtriya Swayamsevak Sangh.

In its recent conclave in Delhi, the Sangh made an attempt to present a different world view and to project itself as an inclusive organisation. But the DNA of RSS is anti-constitution, anti-secularism, anti-diversity, anti-Dalit and anti-women. RSS has always opposed to any recognition of India’s vast and rich diversity, be it diversity of language, faith or culture.

Interestingly, Sarsanghachalak Mohan Bhagwat made an attempt to interpret Hindutva differently from the notion the organisation is known for. Some political pundits are calling it soul searching by the Sangh, while others see it as a defining moment of the organisation vis-a-vis Indian polity. But the fact is it was a damage control exercise to avoid an imminent electoral loss for the Bharatiya Janata Party in the forthcoming assembly elections and the General Elections in 2019. It was a political outreach programme by the so-called ‘cultural’ organisation.

Both the BJP and RSS suffer the hypocritical trait of not walking their talk and, in fact, doing completely the opposite of what they say. Recently, a minister in the Yogi Adityanath government in Uttar Pradesh compared BJP leaders visiting Dalit households with Lord Ram visiting Sabari.

The comments of Mohan Bhagwat on women are equally deplorable. He himself said that women can be disowned if they violate ‘the contract of marriage’. This speaks of the real character of RSS/BJP leaders. They cannot dissociate themselves from their karma.

Therefore, neither BJP nor RSS has changed and adopted themselves with time but like elephant they have two sets of teeth; khaneke dant alag, dikhane ke dant alag (one set to show off and the other to chew with).

RSS stands for “rumor spreading society” which cannot be taken on face value. After all, it’s the same organisation that backstabbed and betrayed Sardar Patel’s trust by going back on their undertaking and giving birth to the Jan Sangh and ultimately the BJP. Therefore, hypocrisy is an instrument of political management for the RSS and BJP. Will RSS pull up Anant Kumar Hegde who called Dalits barking dogs? Will they ask Modi to sack Jayant Sinha who garlanded members of a lynch mob? Will RSS ever appoint a Dalit or woman as its head?

The perversion of the concept of India as a secular, democratic republic defined in our Constitution to a theocratic and supremacist one is what is trying to tear apart India today, and RSS/BJP are the forces which are responsible for this. The RSS and its leadership historically have been great worshippers of Hitler and Mussolini and their ideas. Nazism and fascism have greatly moulded the ideological as well as organisational frameworks of the RSS. It is really atrocious that an organisation, which had been banned at least twice for anti-national activities by the Government of India after Independence—once by Sardar Patel—is controlling an elected government.

There is another misconception about RSS is that it stands for protection of Hinduism. The Sanatan Dharma of thousands of years does not need a political organisation of less than 100 years to protect it. The fact is RSS is using Hinduism and Hindu sentiments as tools to further their and BJP’s political agenda. The true goal of RSS is not Hindu Rashtra but to “Control the Rashtra” by completely capturing state institutions. RSS is not true to Hindus, otherwise why did they object to equal rights to Hindu women starting with objection to Hindu Code Bill, Rao Committee and Hindu Succession Act. The political Hindutva of RSS has nothing to do with the Sanatan Hinduism which is saraswat.

The RSS, which is fond of demanding unwavering and unflinching loyalty to the nation from religious minorities, is loyal neither to the Constitution of India nor to the national flag. Notwithstanding what the Sarsnghachalak claimed, the reality is RSS has not had a change of heart but they are merely fearing and anticipating change of government in 2019 and hence, indulging in these event management stunts. They have not changed for 93 years and they will not change for next 100 years. Rather, they will get worse in their pursuit to capture India at any cost.

One conclusion from the RSS conclave is that PM Modi has failed to deliver on his promises and now even RSS is hesitating to openly acknowledge or affiliate with his “Kabristan-Shamshaan” politics, though behind the curtains they are “birds of same feather who flock together”.

[The author is a Supreme Court Lawyer and National Media Panellist, the Indian National Congress. The views expressed are personal. First published by National Herald.]