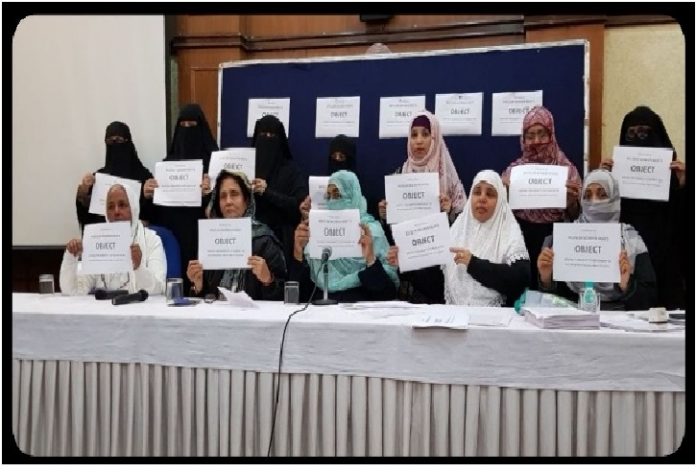 New Delhi:  Taking serious note of the President of India’s address to the Joint Session of Parliament, around 29 prominent NGOs on Tuesday said his remarks have “hurt the sentiments of the entire Muslim community” who called Muslim women as political prisoners. Terming it a “direct attacks on Islam”, they demanded ‘’removal of the paragraph on the Muslim Women from his address.” They also “threatened of bringing thousands of Muslim women to the Parliament” for protest if these remarks are not expunged from the parliament proceedings.

Addressing a joint press conference at Press Club of India here, Dr. Asma Zehra said we are “shocked to learn the address of the Hon’ble President to the joint session of the of Parliament on January 29, 2018, with reference to Muslim Women”.

Dr Zehra, who heads the Federation of 29 NGOs working for the welfare of Muslim Women, said the President by stating that Muslim women have been captive to politics, has “humiliated entire Muslim woman folks and disrespected the ethos of Islam”.

Referring to the controversial Triple Talaq bill, the President had said in his address, which reflects the policy of the government, “for decades, the dignity of Muslim women have captive to political cause benefit. Now the Nation has an opportunity to emancipate them from this situation”.

Rejecting the triple talaq bill, she said the Modi Government through the Presidential address has hurt the sentiments of the entire Muslim community of the country.

The President further added salt to our wounds by disrespecting the ethos of Islam and trying to project Muslim Women as if they are being used as the political prisoners for “political cost-benefit” and his Government is “emancipating” them from this situation, Dr. Zehra said.  She said the President cast the aspersions that Muslim Women cannot live a life of self-respect and courage without this Law.

“This is nothing but a direct attack on the principles of Islam which is the first in the world religion to give equal rights, dignity and respect to the Women”.

Unfortunately, this government has stood low by using the office of the Hon’ble President for this blasphemy and degraded the respect of the Muslim Women, she said.

Mrs. Fatima Muzaffar accused the Modi government of playing politics on Muslim women. Muslim women are not fooled to understand the conspiracies of this government which has been trying to polarize the communities on the religious ground, she said.

Another activist Mrs. Yasmin Farooqi said this government not “Hamdard” of Muslim women as we see what has had happened to Gujarat and Muzaffarnagar riots survivors.

The government would be better advised not use its “brute majority” in the Parliament to upset the constitutional framework of the country, she said.

Women activists said the government and the ruling party BJP have been continuously misguiding the nation of using the minority judgment of the  Supreme Court for bringing up this legislation which is not only the direct interference in the Sharia laws but also against the interest of the women.

“All this is highly objectionable and against the spirit of the Constitution of India. We strongly condemn the approach of the Government and request the President to delete the para on the Muslim Women from his address to the Parliament,” they said.

Dr. Zehra said we will use all democratic option to force the government to remove these remarks and the withdrawal of the bill which would virtually bring Muslim women on the streets for begging. She also said we would organize a protest before the Parliament if the government does not accept our demand.

Meanwhile, a delegation of these women met Mrs. Rekha Sharma, the Chairperson, the National Commission for Women and apprised her concerns over the TT bill.  Dr. Zehra said the chairperson did not see the draft of the bill but assured that she would convey their concerns to the government.