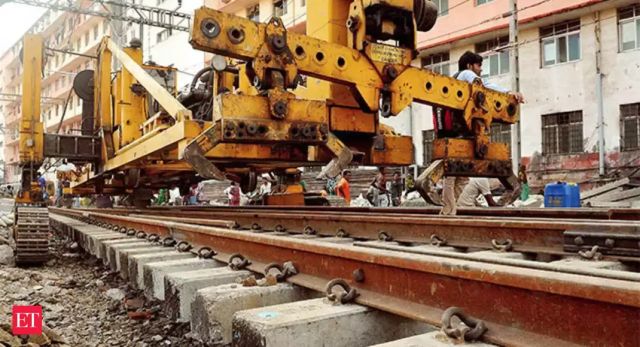 The survey has been conducted 3 times in last 10 years, but in vain

Aurangabad: Apart from reducing the distance about 250 kilometers between North and South India, the proposed Sholapur – Beed – Jalgaon railway line will facilitate and expedite trade, industry and agriculture in various of Maharashtra and other states. Hence it should be consider on priority basis, said Namdev Rao Kshirsager in Beed.

Addressing a press conference organized by the “Sautanter Sainik Railway Magni Andolan Samiti” (Freedom fighters committee for demand for railway line), Kshirsagar put forward the long-pending demand of the area for Sholapur – Beed – Jalgaon railway line and said that the work of Ahmed Nagar – Beed – Parli railway line is satisfactorily nearing to completion, but now government must give priority to the decades-old demand of Sholapur – Beed – Jalgaon railway line which is neglected and ignored by the successive governments and railway department, even though the survey of this line had been carried thrice in the last ten years.

The former president of India Mrs. Partibha Devi Singh Patil also supported the demand and asked the government to consider the new railway line from Sholapur to Jalgaon. After the survey was approved for the 450 kilometer Sholapur-Jalgaon railway in 2008-2009, he added.

Explaining the new rout will be beneficial and advantageous to various districts of Maharashtra, Karnataka, Madhya Pradesh, Uttar Pradesh and Rajasthan, he said that after getting the construction cost back in just 10 years, this new line can become ‘Grand Central Line’ in the western part of the country. Additionally, for the travelers between North and South India, the distance will reduce about 250 kilometers. And the existing distance from Sholapur to Jalgaon which is 584 kilometers will be reduced by 134 kilometers.

Kshirsagar pointed out that the survey was conducted 3 times in the last ten years; First survey was completed in 2008, and after that in 2012 and 2015, but in vain.

Initially, the railway department conducted survey for Sholapur – Beed – Georai – Paithan – Aurangabad – Ajanta and Jalgaon. But in next survey the rout was changed omitting Paithan and Aurangabad. And in new rout Ambad and Jalna included after Georai.