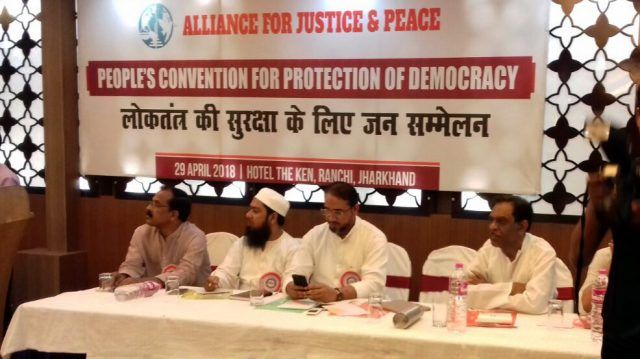 Ranchi: Mounting a blistering attack on the BJP-led government in Jharkhand at a convention here on Sunday, Justice Kolse Patil said the state has witnessed the largest number of mob lynching cases after Rajasthan which is also ruled by the BJP. The convention demanded that the state government should withdraw its ‘illegal’ ban of Popular Front of India and MSS.

Addressing the “People’s Convention for Protection of Democracy” organized by the Alliance for Justice and Peace, the former judge of Bombay High Court, Justice Patil said the country has been pushed toward ‘dictatorship’. He said people are suffering due to the “dictatorial and fascist” attitude of the central and several state governments led by BJP.

The convention was also addressed by Moulana Khaleel-ur-Rehman Sajjad Nomani who said that  the present government poses a real threat to democracy as every institution is being taken by the RSS which does not believe in democracy.

The prevailing situation has forced the intellectuals and civil activists to come together and to act against the fascists and communal forces. The ‘Alliance for Justice and Peace’ is one such platform active to save the democracy in the country which headed by Justice Kolse Patil.

Passing a host of resolutions, the Convention demanded that due compensation must be given to the mob-lynching victims. It also demanded that the Jharkhand government must issue the exact population figures of various tribes, backward classes and castes in the state.

One resolution said Jharkhand‘s BJP government is ‘working against the democratic norms which imposed ban on 16 public movements. It also said the government is crushing the voices of voiceless particularly tribes, SCs, backward and minorities.

“This house unanimously demands to lift the ban on all democratic lawfully registered organizations like MSS, PFI, and others.”

The convention also condemned the arrest of thousands of social activists who were carrying democratic movements in the state. Demanding immediate release of all activists, it said these arrests are unlawful, illegal and tantamount to deny the democratic rights to the people.

On mob lynching, the resolution said “victims have not compensated adequately while the perpetrators of these heinous crimes are neither arrested nor booked under sufficient laws which ultimately let them go scot-free. This house unanimously demands to book the culprits under adequate laws in the interest of natural justice and victims should be given adequate compensation.”

It also pointed that Jharkhand is the richest state in respect of mineral resources which has more than 40% of the national mineral reservoir but still the population of the state is one of the poorest population of the country only because the people are denied of their right to use the benefits of these resources.

Demanding the protection of local people’s traditional identities, it said ‘the state government should  declare the exact population of various tribes, backward classes, and castes.