Prime Minister’s Research fellowship in tatters in the very first year, offered only to 135 scholars as opposed to 1000 promised 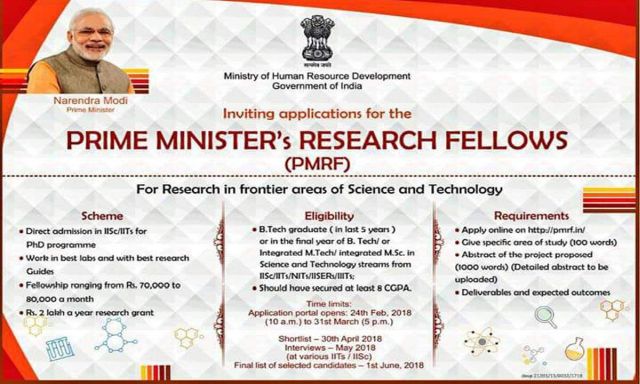 New Delhi: In a major disappointment to aspiring research scholars from Centrally Funded Institutes (CFI’s) only 135 students have been selected in the first batch of Prime Minister’s Research Fellowship (PMRF) scheme as opposed to 1000 per year as proposed in the Ministry of Human Resource’s blueprint for the scheme.

According to Ministry of Human Resource and Development’s order (F.N0.35-5/2017-TS.I) dated 8th February 2018, Prime Minister’s Research Fellowship (PMRF) Scheme was started at a total cost of Rs.1650 crore wherein a maximum of 3000 meritorious students from IITs, IISc, IIITs, NITs and IISERs had to be selected in three batches starting from 2018-19 for direct admission into Ph.D programmes in IITs and IISc to pursue research in frontier areas of science and technology.

“MHRD is playing with the careers of research oriented students. The number of students they have selected is way less than what was promised. When the scheme was launched it brought in a lot of hope, but I don’t know why they are backtracking from their own promises now” says Manan Ahmad, an aspiring student from National Institute of Technology, Srinagar.

However, a senior professor from the same institute wishing not to be named said that scheme was bound to fail. “There are limitations in the selection procedure. Shortlisted candidates have to be necessarily from Centrally Funded Institutes (CFI’s) like IIT’s, NIT’s, IISER’s or IISc and their CGPA must be 8 or more. So, a very few are eligible and they have to select from a limited sample space and hence only 100 odd could be selected” he says, adding ”This is also discrimination against innovative students studying in institutes other than CFI’s. They tried to get more applicants by extending application dates twice or thrice but the stringent eligibility criteria rendered the process futile.”

While government claimed that fellowship aimed at helping students in carrying out research in cutting edge science and technology domains, with focus on ‘national priorities’ no student has been selected in two important disciples – Mathematics and Chemistry.

The most number of students were selected from Mechanical and Metallurgy engineering- 26 and 24 respectively.

An official in the Ministry of Human Resource Development said that since only about 1900 students applied for the fellowship, the number of selections couldn’t exceed 135. “Hopefully from next year the response would be better and more applicants will be selected,” he said.