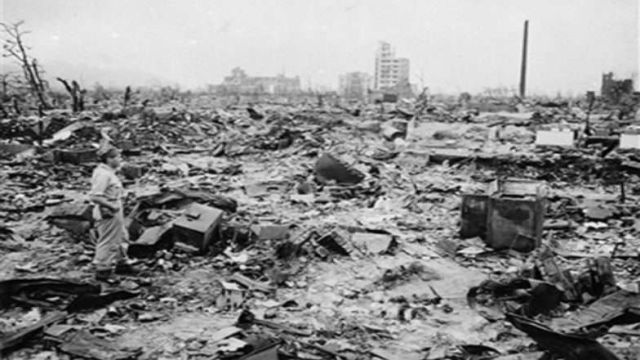 August 6 is etched in an apocalyptic manner on the global consciousness given the nuclear enormity that engulfed the unsuspecting residents of Japan’s Hiroshima on that day in 1945. Three days later Nagasaki met the same fate, though tragically August 9 receives even lesser attention from a jaded world whose attention span often oscillates from one tweet to another.

The “national herd” in every major demographic cluster is episodically led from one sensational but banal event to another and the collective danger that the nuclear weapon poses to humanity is glossed over, with a fleeting reference on Hiroshima Day when platitudes are dutifully mouthed by the political leadership across the world.

The year 2018 is a bit different, but in an alarming way. Prickly nuclear nationalism now rules the roost and the charge has been led by the world’s oldest and most powerful democracy. On July 23, US President Donald Trump tweeted — as is his wont — to Iranian President Rouhani, and this one was in all caps:

NEVER, EVER THREATEN THE UNITED STATES AGAIN OR YOU WILL SUFFER CONSEQUENCES THE LIKES OF WHICH FEW THROUGHOUT HISTORY HAVE EVER SUFFERED BEFORE. WE ARE NO LONGER A COUNTRY THAT WILL STAND FOR YOUR DEMENTED WORDS OF VIOLENCE & DEATH. BE CAUTIOUS!
Donald J. Trump (@realDonaldTrump)

To be fair to Trump, this tweet was in response to what the Iranian President Hassan Rouhani had said the previous day (July 22) when he warned Washington that provoking Tehran over the nuclear deal could lead to the “mother of all wars”. The Iranian reference was in no doubt — it was invoking the spectre of WMDs — long-range missiles fitted with nuclear warheads.

Over the last year, the global nuclear arsenal has increased in numbers among the nine nations in the world that are nuclear-weapon capable. This apocalyptic club that holds the world to ransom includes the original five – the US, Russia, UK, France and China. Post-1964, the other four who have joined this “club” are Israel, India, Pakistan and now North Korea. Today the most serious national security threat to the US is deemed to be a mix of the nuclear weapon and terrorism as posed by non-state entities — often with state support.

Paradoxically, over the last year, Pakistan, often referred to as the cradle and nursery of global terrorism, has the distinction of possessing the world’s fastest-growing nuclear weapon arsenal. Much of this capability has been enabled by a deep and opaque partnership with China and North Korea.

Furthermore, Pakistan is the only nation among the nuclear nine wherein the command and control of the nuclear button rests with the Pakistan military and the civilian leadership is only notionally in the loop. Whether Imran Khan, if he becomes the Prime Minister, will be able to assert civilian control remains moot. There are many voices even within Pakistan that believe a mercurial Khan may not be the most prudent choice, when it comes to nuclear weapons.

However, on the other hand, such prudence at the very top of national political leadership, while desirable, went out of the window with the election of Trump as US President, a leader who recently boasted about the size of his “button” apropos his North Korean counterpart.

The deeper concern in 2018 is that nuclear weapons are being brandished in a far more visible manner and the leaders of the US, Russia, Iran and North Korea are cases in point. Each of them has justified this posture as a case of safeguarding their national security, sovereignty and integrity. The consequences that will follow by way of an apocalyptic regional nuclear fallout with millions — yes, millions — killed receive little or no attention.

The greater anguish is that the global political leadership remains indifferent to such nuclear sabre-rattling and has done an ostrich act by treating these statements as political rhetoric (bluff and bluster?) and devoid of substance. And civil society, which in the 1960s and 1970s was alert to the gravity of the nuclear threat, is now cynical. The nuclear threat joins the cluster of many lost causes — global warming, ocean pollution, the plastic peril and shrinking bee population among other amber lights that are flashing.

One slender sliver that followed the focus put by former US President Barack Obama on the nuclear threat is the effort by the ICAN — the International Campaign to Abolish Nuclear Weapons — that was launched in 2007. This global NGO comprising almost 500 partners from 100 countries has pushed for an international treaty on the prohibition of nuclear weapons. Elimination of the global nuclear arsenal is the Holy Grail and in 2017 ICAN successfully negotiated and concluded this treaty at the UN.

ICAN was awarded the 2017 Nobel Peace prize for its effort but the major powers, including India, have distanced themselves from this advocacy. Thus the ICAN initiative, while laudable, remains ineffective.

Ironically, India, which has legitimately claimed a distinctive nuclear status in the global order, has ceded the disarmament space it once led from 1960 to 2010. India is a non-signatory to the Nuclear Non-proliferation Treaty (NPT) and demonstrated its nuclear-weapon capability in May 1998. Pakistan followed and South Asia exudes a nuclear prickliness that is disquieting.

Based on its nuclear profile that combines nuclear restraint and responsibility, India was admitted to the global nuclear order in late 2008, thanks in large measure to the political resolve of then US President George Bush.

While New Delhi remains committed to “universal, non-discriminatory and verifiable nuclear disarmament”, it has made no significant effort in the last few years to demonstrate its status as a “different” kind of nuclear-weapon power. ICAN is a case in point.

Prime Minister Narendra Modi has brought commendable traction to the challenge of global terrorism since assuming office in May 2014 but has remained relatively reticent on the nuclear issue. One hopes that the Indian leadership will address the nuclear issue at the global level with the urgency it warrants, so that Hiroshima-Nagasaki remain the tragic exception.

(The author is Director, Society for Policy Studies, New Delhi. The article is in special arrangement with South Asia Monitor)