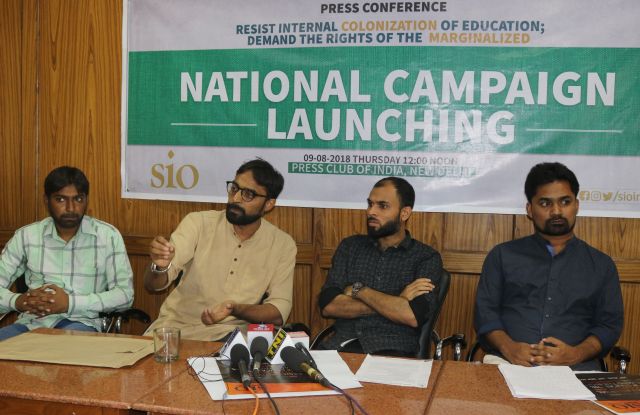 New Delhi: In the title of ‘Resist Internal Colonization of Education; Demand the Rights of the Marginalized’ SIO of India spearhead a nationwide campaign from Aug 25th to September 10th 2018. SIO of India General Secretary Khaleeq Ahmed Khan told the media in a launching press conference at press club of India today.

Through this campaign SIO puts forward 10 demands before the government and the public which include,

SIO of India Understands that there is a conspired effort is taking place to negate the opportunity for the marginalized students in the field of education. New educational policies as well as the systematized invisible violence are extensively contributing to make it happen. This is actually similar to old fashioned castiest colonialist monopoly of education and knowledge is coming back to the practice. That’s why SIO of India decided to give the title for the campaign as ‘Resist Internal Colonization of Education; Demand the Rights of the Marginalized’.

As part of the campaign plenty of different programs will be conducted in campuses and major cities across the country. One of the major programs among them is campus caravan. SIO central team will lead a caravan which goes to northern states of India covering Rajasthan, Haryana, Punjab, Delhi, Utharakand, Uttar Pradesh, Bihar and Jharkhand. Apart from that SIO state committees also organize many compelling programs by raising other local educational issues also. Seminars, symposium, mass rally, public conferences at state capitals and memorandum submissions to people’s representatives and ministers will also be conducted. A grand final program will be organized here in Delhi with the participation of different student leaders. SIO of India National President Nahas Mala will address the gathering of grand final program. 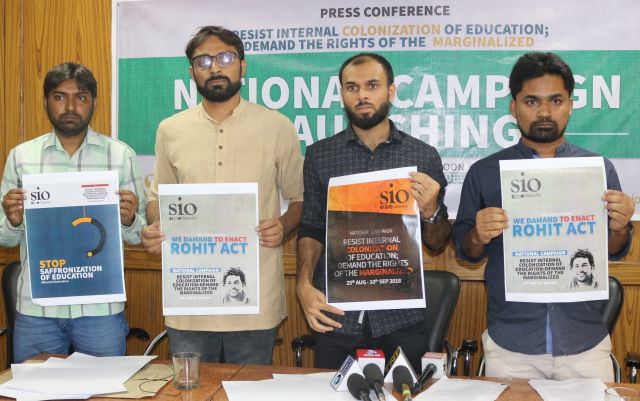