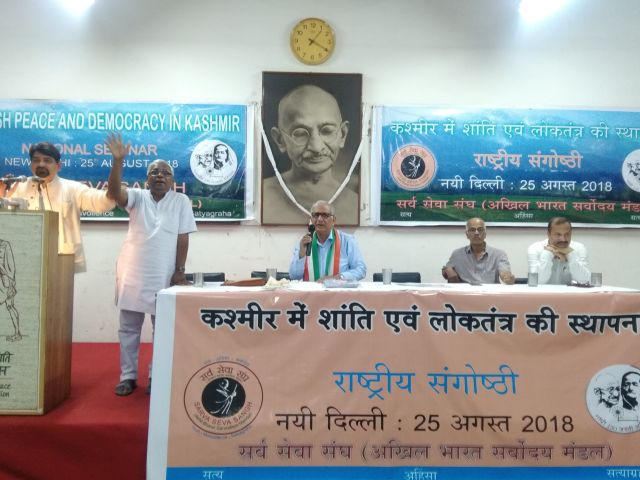 New Delhi: Stoutly defending the Article 35-A, a national seminar on “Establishment of Peace and Democracy in Kashmir” on Saturday urged the BJP-led Government to “stop attempts for forming the government in Jammu and Kashmir by means of horse trading”. The seminar also demanded the resumption of dialogue at every level and resolved to work for establishing peace through people to people contact which witnessed uproarious scene over the defence of Article 370 and New Delhi’s “betrayals”.

The one-day seminar on Kashmir was organized by All India Sarvodaya Mandal for the first time which is a platform Gandhians (Disciples of Gandhiji’s ideology. The Seminar took the notice of reports that the BJP is allegedly trying to form the government in the state by “horse trading” and “alluring” disgruntled PDP MLAs, and warned that the Central government should desist from such activities.

Speaking on the occasion, Santosh Bhartiya, Editor-in-Chief Chauthi Duniya, said the story of Kashmir continues to remain a story of “betrayals” where democracy never prevailed. It has been a series of monumental betrayals which traverse the Kashmir and New Delhi political history, he said. This assortment of betrayals, sell-outs, duplicity, and treachery seems unmatched in any living history of a nation

Strongly defending the Articles 370 and 35-A, he said the abrogation of these Articles would “automatically end” the accession of Kashmir to India. When he said this, some members in the audience raised brouhaha and blamed the Kashmiris for the present situation.

Continuing his speech after this ruckus, Bhartiya, who is also a former member of Lok Sabha and visits the Kashmir valley frequently, said today the atmosphere in the country is so suffocating and surcharged that even mentioning Kashmir is inviting “anti-national” label as some people demonstrated here. Any tinkering with the special status of the state is fraught with dire consequences, he warned. He also said the Kashmir problem cannot be solved by using force only as it is not only “a law and order problem”.

The seminar also passed more than half a dozen resolutions asking the Government of India not to “indulge in horse trading” for the formation of the new government and dissolved the Jammu and Kashmir legislative assembly and hold fresh election in free and fair manner.

In the view of the ongoing hearing over the validity of the Article 35-A in the Supreme Court, the seminar strongly opposed any tinkering with these articles enshrined in the Constitution. A host of speakers including Major General ( Retd) Tej Singh also pointed out that other Indian such as Himachal Pradesh, Goa, Mizoram etc. got such Constitutional safeguards.

In one of its resolution, the seminar urged the army to stop meddling into the affairs of the state and to restore the human rights of the people. It also urged to stop calling all Kashmiri people as “anti-national” and their “persecution”. It also asked the resumption of dialogue with all the stakeholders at every level as the problem cannot be solved by gun. It also asked the government to start process of rehabilitation of Kashmiri Pandits.

The other speakers who spoke on the occasion are Arvind Anjum, S P Verma, Bashir Asad, Suresh Khairnar, Ravi Netish, Chandan Pal and others.