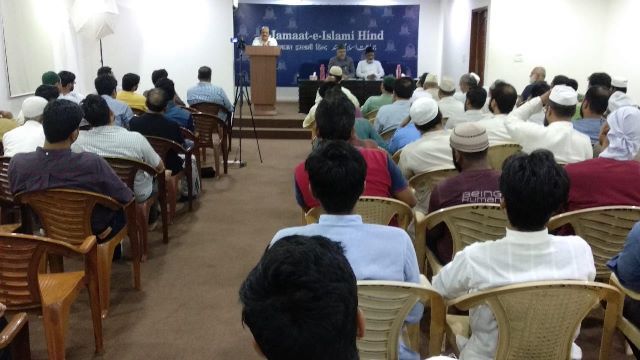 New Delhi : Renowned thinker and writer Dr Javed Jamil has said that “Supreme court’s judgement on article 377 will become a gateway to commercialise homosexuality”. He was giving a talk at jamaat e Islami headquarter New Delhi on “Article 377: implications and role of market forces”. He said that the domination of the global forces of economics during last two centuries has been playing havoc with the health of mankind and it’s peaceful existence within family and social system.

Dr Jamil argued that “human rights of homosexuals must be ensured but the act of homosexuality in itself must not be defended in the name of human rights”. He said that the process of commercialization of human susceptibilities is completed in 5 stages of Normalisation, Institutionalisation, Legalization, Commercialization and Globalisation. With homosexuality decriminalised the stage is now set for the booming of gay tourism, gay literature, gay media and gay clubs, he said.

Dr Jamil gave the statistics of how the so-called modern sexuality and communication of sex has resulted in the death of more than 35 million people due to AIDS in last 25 years. “More than 1 billion children have been killed through abortion in the same period”, he added.

Dr javed Jamil stressed the need of coming together of all religions against the “Dangerous Economics” including the Commercialization of sex, especially homosexuality.