The withering of Indian Muslims : The remedy thereof 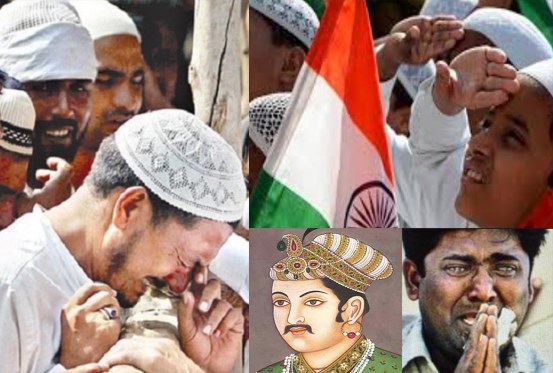 From being the authorities in the magnificent Red Fort of Delhi to becoming BPL ( Below Poverty Line) card holders in the unauthorized ghettos of adjoining Baburpur, the journey of Indian Muslims from riches to rags has been that of ignorance, stubbornness, voluptuousness, greed, intolerance, hypocrisy, leader-less-ness and a total disconnect to Allah the almighty and His book the holy Quran.

The once ruling community has lost it to every adversary weak or strong, big or small. It all began with the internal defeat on personal, moral and spiritual front before they lost it to a handful of British mercenaries, and then to the chatur Baniyas. The ex-rulers (i.e. Muslims) are still in fools’ paradise thinking those who rule them now are their servants, as the de-facto rulers cunningly call themselves public servants (janta ke sevak).Though the foolish masters can’t even enter into their servant’s (public servants’) office without prior permission which may not be granted to them for months or years without any cause or explanation.

After some lost mortal combats with the British intruders and horrific failures with post-independence elected rulers: Indian Muslims, still rotten-hearts, have been indiscreetly sucking up to the money-centric power players of Indian politics. But despite their whole hearted prostrations to their political masters and to their utter dismay they have slipped on to the lowest rung of social and economic ladder as per the Sachar committee report.

In this article I shall argue my case as to why the upliftment of Indian Muslims can’t be centrifugally achieved through political means and how the message and the Messenger can indeed cure the ailing believers and generate the centripetal force required to strengthen the moral fabric and the consequent power to overcome their perennial downfall.

Let the media conflate my educational reform to Islamic extremism, but what you read is who you are comes first in our case. We first need to throw all those subverting, brainwashing, deluding and imposed curriculum textbooks to the Ganges and begin with what Allah asks us to read and understand until the heavenly blessings of our creator comes with our emancipation from the darkness we have for so long been into. The journey begins with imbibing the 6236 verses of the holy Quran and let its every word flow into our veins and consciousness. Let me warn you at the very outset that most of the Masjids and madrasas will not only resist but smear your quest for learning the holy Quran in the true sense of its meaning as most of these masjids and madrasas have been occupied and annexed by various sub-religious outfits who serve their own brand of opium to intoxicate their cadres in the name of mazhab and jamaat. We have to begin our arguments with reference from Quran and end with the same. No one other than the holy prophet has the right to interpret the verses of the holy Quran and remember not to get lost in translations of the holy texts in vernaculars.

Holding fast the rope of Allah that He has stretched out for us (i.e. the holy Quran) will erase our divisions and unite us as faithfuls. It will cleanse us of the vices of sectarianism, caste and class consciousness, regionalism, illiteracy, greed, dishonesty, fear, hatred, inferiority and superiority complexes and bunch us together as ummat-ul-quran led by the priceless virtue and guidance of the holy prophet PBUH like how the first enlightened community of his all victorious companions was formed.

Now after the Indian Muslims have done justice to their souls, comes the turn of bringing justice to the soil of their motherland. With a clear mind and kind heart Muslims will access the material and human resources of India and turn them into gold while recovering the stolen gold of India from the indigenous and foreigner plunderers. One must remember that in the period of Jahangeer India had the highest reserve of Gold and was called “The golden bird” the world over but has since slipped to eleventh position with a gold reserve at only 558 tonnes according to the World Gold Council.

Once the brave Indian Muslims armed with the divine knowledge of the holy Quran and science and technology at their fingertips rise to establish justice on the soil of India, the 125 crore Indians will rally behind them with a single call to duty. Like prophet Ibrahim PBUH first built the Kaaba and then gave Azaan for Hajj and the world rallied on his call.

In order for Indian Muslims to become from helpless to helpful it’s mandatory that they strictly avoid being a tool of propaganda, fake news, mudslinging , history distortion, mental subversion, riba based banking, fraudulent businesses, the precursors to adultery, the precursors to diseases, tyrannical man made laws and part of the formation of political or sub-religious groups.

One must not forget that the path to reuniting with Allah is full of blockades, diversions, distractions, lures and threats to lives and wealth surreptitiously erected by shaitaan and his army of humans and Jinns. Treading this path is as challenging as it was for Bilal Bin Rabah to become Syedna Bilal (Our leader Bilal) when he chose to embark upon his journey to the eternal glory. It’s only the brave hearts with rock solid Imaan who can join me in this journey of ultimate success. Haiya allal Falah , I welcome you all to the path of knowledge, the path of Quran, the path of patriotism, the path of humanity and the path of Deen.

(The author is a  Kuwait based Indian author who rejects the idea of formal schooling. He can be reached at Email: wichars2012@gmail.com. The views expressed in this article are the author’s own and do not necessarily reflect Muslim Mirror’s editorial stance.)