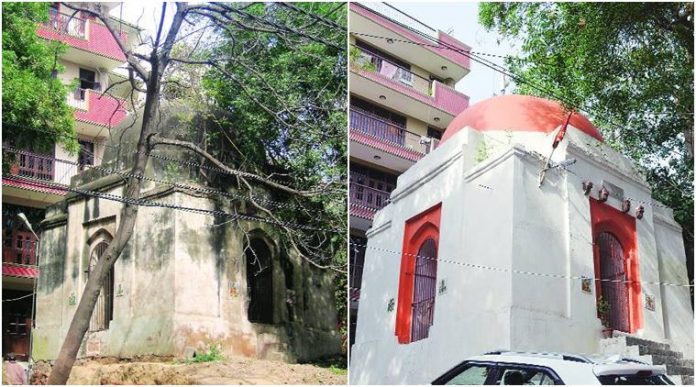 Delhi: Overnight, the tomb of  Tughlaq dynasty become the Shiv Bhola temple two months ago, it is reported that in the month of  March, few unidentified people painted the tomb with saffron and white colour as well install the Hindu Idols inside the structure.

Additionally, two saffron benches have been installed to sit in front of the monument, as well the BJP councillor Radhika Aborol Foghat’s name is also written on these benches.

The mausoleum named as ‘Gumti’ situated in Humayumpur village of Delhi’s Safdarjung Enclave. This tomb built between the residential buildings and the park has been given the status of heritage as per the state government, but the response of the Archeology Department of Delhi Government was not received yet.

Here, It is a complete violation of the Citizen Charter of the Archeology Department, which is written inside or outside the monument that; “the wall cannot be painted or whitewash”. It has also been mentioned that the originality of these monuments of historical importance should not be harmed.

As per the 2010  notification of state’s Urban Development department, the Mausoleum was notified as one of the 767 heritage sites in and was listing grade-I. While in 2014, again the Archaeology department recognized it as a heritage site. And the structure of the tomb implies that the tomb belongs to the late Tughlaq dynasty or early Lodhi period, the architecture pointed tip of a dome and there is the absence of Mihrab, which is similar to other heritage belongs to the particular era.

Share
Previous Tickling Mischief?
Next The Dagger of Islam