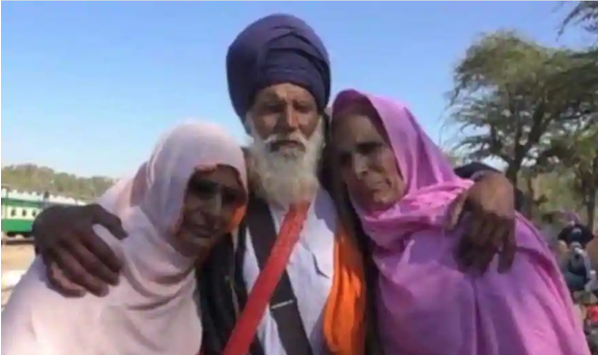 Two Muslim sisters Mairaj Bibi of Shahdra and her sister Ulfat Bibi of Sheikhupura Lahore had an emotional reunion with their Sikh brother Beant from Gurdaspur village near Dera Baba Nanak after 71 years of separation on Sunday.

It was the most emotional moment of life for Ulfat Bibi and Mairaj Bibi, when they hugged their brother Beant Singh tightly as they met him for the first time in seven decades.

They said before their family members migrated to Pakistan their elder sister and a younger brother who was one and a half years old at that time went missing.

Natives of Paracha village in Gurdaspur near Dera Baba Nanak in India, the family was shifting to Pakistan when a son and daughter got lost in the melee.

The mother, Allah Rakhhi, later contacted one of her former neighbors in Gurdaspur. Luckily, she managed to trace and found out the whereabouts of her son, Beant. According to a Pakistani newspaper, Express Tribune, since then Beant has been in touch with his sisters through letters and phone calls.

But it was only this year he managed to meet them face to face. He had gone to Nankana Sahib as part of the Sikh jatha from India.

The news report said that Ulfat Bibi wants the Pakistan government to allow her to travel to India to meet the rest of her brother’s family.

Now with Pakistan and India taking steps to facilitate the visit of Sikh pilgrims to Kartarpur Sahib, the final resting place of Guru Nanak, more such reunions will be possible.