Breaking News
Home / News / UK: While Indian diaspora was protesting against Hindutva in freezing cold, the fans of Mahmood Madani were busy in evening dinner

UK: While Indian diaspora was protesting against Hindutva in freezing cold, the fans of Mahmood Madani were busy in evening dinner 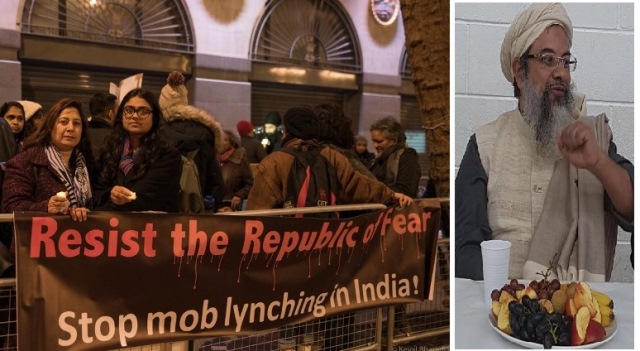 London: Muslims are living in a different world, be it in New Delhi or London. When right activists, people from different walks of life, journalists, students came out to protest against mob lynchings, bogey of ‘love-jihad’, killings of innocents in the name of cow and hate mongering,  Muslims in Delhi found solace in relaxing at their homes.

During protest against Hindutva brigade at Jantar Mantar , Parliament Street, Haryana Bhavan or  UP Bhavan or dharna  (sit-in) outside CBI headquarters  against the mysterious disappearance of Jawaharlal Nehru University (JNU) student Najeeb Ahmad, one community that was found missing was Maulana’s (cleric’s).

The same scene was witnessed in London  as well on Republic Day evening. The Indian diaspora, instead of hosting and participating in festivities, mark the celebrations by staging a protest against Hindutva attacks on minorities and Dalits in India. 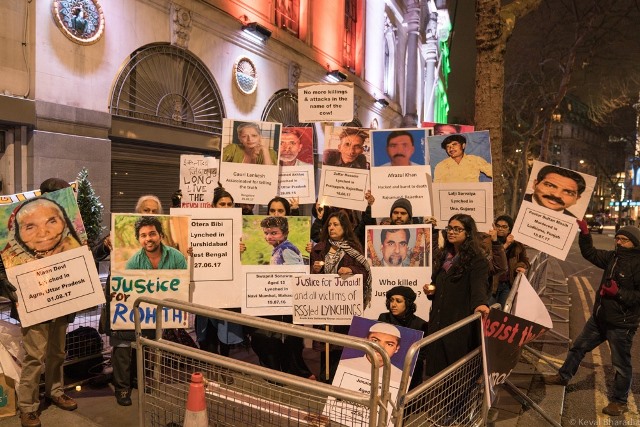 The protesters through their playcards also soght to know ‘who killed Justice Loya?’

In the protest organised by South Asia Solidarity Group (SASG), the agitators strongly condemned the horrific violence against Muslims and Dalits that have escalated under the Modi government.

It was sad but not surprising that the representation of Muslims in the protest was almost nil. There are big Islamic centres and organisations run by Indian Muslims in various parts of the United Kingdom. And it’s not that the representatives of these organisations are indifferent towards the escalating violence against their brethren in India. They certainly want to raise their voices against these crimes, but it appears as if they want others to vent their anger on their behalf. This is difficult to say whether this is simply because of fear or something else.

Majority of Indian Muslims in the United Kingdom come from Gujarat; most of whom have their inclination towards Tableeghi Jamaat. However, this would be sheer injustice to put the blame of their inaction on their affiliation with a particular organisation because the attitude of those coming from other Indian states and belonging to various religious groups is not any different.

Hindutva groups, on the other hand, are active at every level. They lobbied and succeeded in having the un-announced ban on British visa to Modi imposed in the wake of Gujarat riots of 2002. A leaked report of the British High Commission on these riots had said that it had gone as far as saying that these riots had the “hallmarks of ethnic cleansing and that reconciliation between Hindus and Muslims is impossible while the chief minister remains in power”.

Indian diaspora (mostly Hindus) are always on front protesting against the killing of Muslims and vilification campaign of Modi government in India , unfortunately Muslim community mostly remained spectators and didn’t play any role in those protests.

Ironically when the Indian diaspora (mostly non-Muslims) were protesting, onutsie Indian High Commission in London at the evening of Republic Day the followers of Mahmood Madani were busy in  hosting an evening dinner at an Islamic Centre in his honour.

Share
Previous Temples, Politics and Leaders: From Jawaharlal Nehru to Rahul Gandhi
Next “Made in India” receives overwhelming support from rural student debaters