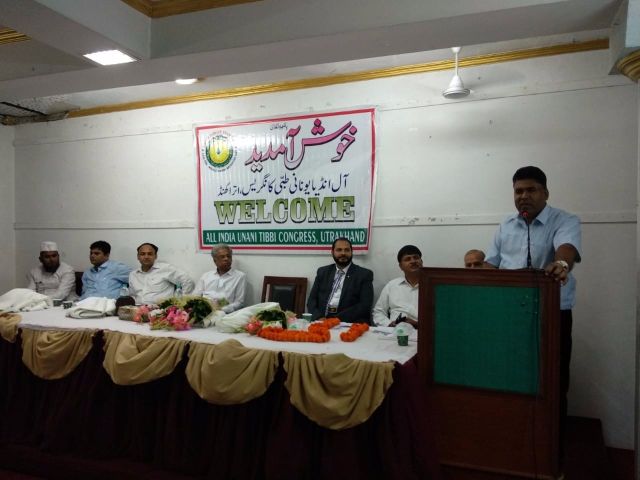 Dehradun: The Uttarakhand government has assured the All India Unani Tibbi Congress that it will give all sorts of help for the promotion of Unani medicine in the hilly state. The State Health Department Director Dr Arun Kumar Tirpathi said all the demands made by the Tibbi Congress are genuine and just.

Dr Tirpathi, who was speaking as chief guest at the Tibbi Congress’ State convention here, said the department has started the construction work of the proposed Unani Medical College at Kaliar Sharif from this financial year and it has also filled all the vacant posts of Unani medical officers and pharmacists across the state. Lauding the role of Unani medicine in building a healthy India, Dr Tirpathi announced that the state government has sanctioned five new Unani dispensaries in the state.

On the occasion, he also urged the participants of the convention to excel in their field and serve the people sincerely. We should take pride in our traditional medicine systems because it has proved its mettle and efficacy in treating major ailments without any side effects as the world today needs such system, Dr Tirpathi said. He also advised the delegates to increase their knowledge and build capacity.

The state-level convention was organized by the All India Unani Tibbi Congress (Uttarakhnad) at the Tasmiya Academy here. Referring to CCIM member Dr Mohammad Haroon, who is also the vice president of Unani Tibbi Congress (Uttarakhnad), Dr Tirpathi has assured that if any proposal comes from the Director General of the Central Council for Research in Unani Medicine (CCRUM) for setting up a research center here, we will not only welcome the proposal but will provide a piece of land for it.

The Health Director Dr Arun Kumar Tirpathi also commended the contributions rendered by Dr Syed Farooq for the promotion of Indian traditional system who is the chairman of Himalaya Drugs. He said Dr Farooq has done tremendous work for the development of Indian medicines.

In his presidential remarks, Prof Mohammad Idrees, Principal Tibbia College,( Qarol Bagh New Delhi), expressed the hope that the Unani medicine will prosper under the guidance of Dr Tirpathi who is a not only a bureaucrat but also a technocrat. Delivering a comprehensive lecture on Unani medicine, Prof Idrees said the financial assistance provided by the state government for making pharmaceutical, Unani institution and cultivation of herbs will go a long way in promoting the Unani medicine in the hilly state. He point out that Hakim AjmalKhan, Hakim Kabeeruddin and other stalwarts of Unani Tibb had deep relation with this city (Dehradun) because the area has vast variety of medicinal plants and herbs.

Dr Mohammad Ubaidullah Baig, International UN Ambassador for Peace, who also heads the youth wing of Tibbi Congress, highlighted the contributions of Unani medicine stating that it has been serving the humanity for the last five thousand years. He said Unani Tibb has bright future as it has been becoming popular in many countries because of it is a side-effect treatment.

Dr. Syed Ahmad Khan, secretary general of All India Tibbi Congress said the Tibbi Congress’s sole motto is to protect the interest of Unani medicine and it has been successful in this endeavour since its inception. He presented the report of its activities before the gathering.

On the occasion, the general body and its executive council meeting of the All India Unani Tibbi Congress was also held.