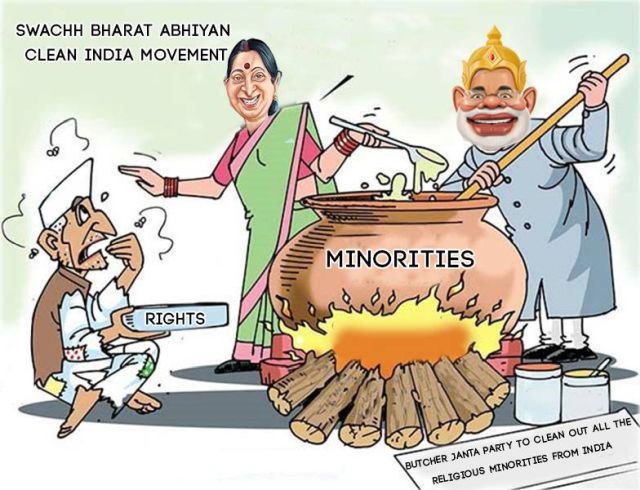 India has an impeccable history of welcoming the stranger and giving refuge to the oppressed, rejected and the evicted. She has welcomed Jews, Christians, Zoroastrians and the Baha’is. Indeed the very first mosque built outside of Arabia was in India by a Hindu King in the state of Malabar. The Tibetan Buddhist refugees found a home in India; the Ahmadiyya Muslims felt secure, so were the displaced Bangladeshi and Afghan refugees.

This beautiful pluralistic 5000-year-old tradition of India is in peril now. BJP and its affiliates (The Sangh Parivar) that govern India “currently” are hell-bent on destroying that heritage. They want to force non-Hindus into obedience and tell them what they can eat or believe, and whom they can marry or live as 2nd class citizens. They want to free India from Christians and Muslims and plan to convert them by 2025 to Hinduism. Indeed, the ISIS had given similar options to the Christians and Yazidis.

Make no mistake about it; Hinduism is a religion of peace like all other religions. The problem is not between people of faith, but the radicals.

A few Indian American organizations linked to the Sangh Parivar want to whitewash the situation. They want to portray that everything is hunky dory in India.

Hunky dory it is not, the Congressmen and Senators are fully conversant of the harassment, lynching, raping and killing of Christians, Dalits, Muslims, Sikhs, Atheists and others in India.

It is time for the Indian Americans to save the honor of India and restore her pluralistic heritage that got derailed in the last four years.

The prosperity of a nation stands on her two firm legs; economic growth and social cohesion, one will not sustain without the other.

If the minorities continue to live in apprehension and fear, the whole nation gets engaged in useless battles and the prosperity will come to a grinding halt, and the country will limp until it reaches a new life or loses all that was achieved.

The confidence of foreign investments in a nation spurs the growth, India’s IT industry, call centers, and businesses have raised the standard of living for many. As long as the investors feel secure about their investments they will pump in more funds. However, when they see chaos emerging with the nations discriminative practices, harassment, lynching, rapes and killing of the minorities, they will pull out and everyone stands to lose.

It was embarrassing to note the missing presence of India at the religious freedom conference held by the Department of State in July 2018. If the violations continue, India may get stamped as a “Country of Particular Concern” for violations of religious freedom. It will hurt India, particularly the business community and the information technology sector.

The whitewash report produced by the Hindu America Foundation is understandable. No Indian wants India to lose, but neither should we compromise on the truth to look good. We hope to produce an accurate state of the union; after all, India’s emblem includes the phrase, Satyameva Jayate – Truth triumphs.

The majority of Indians of all faiths believe in Pluralism, i.e., respecting the otherness of other. It is not Hindus either, but the radicals among Hindus that are causing the problems with the subtle encouragement from the BJP government.

Quotes from the HAF, reported by Jha;

The truth is far from it. It sounds like the majority is doing a favor to the minorities in ‘accommodating’ them. It is like saying “we give equal rights to women” who the hell are we to give them their rights, to begin with, the rights were theirs. Indeed, every Indian is guaranteed those rights; we are all equal citizens. No one has more privileges than the other.

“To bring greater stability to the region and prevent the growth of radical Islamist and Communist/Maoist terrorism.” This statement is too hypocritical and divisive to exclude radical Hindutva terrorism from the list. The issue is not with Hindus or Muslims; it is with radicals among them.

“Overall, it seeks to show the broader story of religious freedom and pluralism in India, which is often not, reflected in the media or US policy circles.” Indeed, India was a pluralist nation until the Hindutva brigade took over the country four years ago.

We need to come together and appeal to the Government of India, to issue visas to the commissioners of the USCIRF to investigate the Sikh Genocide, Massacre of Muslims in Gujarat, killing of Christians, Rapes, and lynching of Dalits, and harassment of Sikhs. If the commission gives a clean certificate, it will help boost the investor confidence in India; on the other hand, if India’s record is of particular concern, then it is time to fix it than pretending to be holier than thou.

I would appeal to the Hindu America Foundation to issue press releases condemning the lynching of Muslims, killing of Christians, harassment of Dalits and Atheists, by condemning each event, it will give them the credibility to be a legitimate pluralist organization for Human rights.

We will also write a letter urging Prime Minister Modi to speak out forcefully against harassment of any Indian and pledge that no Indian has more privileges than the other. Ambassador Sam Brownback says, if evil acts get condemned as they occur, they will be choked and will not see the light of the day.

INDIA: FROM CHAOS TO COHESION | Yes, we can make that happen- please feel free to share, lets restore India to its greatnessLANGUAGE: URDU/HINDIACTION IS REQUIRED ON YOUR PART…

(Mike Ghouse, is president of the Center for Pluralism and is committed to fostering cohesive societies where no human has to live in apprehension or fear of the other. His India Blog is http://MikeGhouseforIndia.blogspot.com )